The Little House on Everywhere Street

The Little House on Everywhere Street

A unique family from a magical house finds themselves in a pickle that spans space and time. The Redmaynes in ‘The Little House on Everywhere Street’ are a little different from your average family. And that’s before you take into account the tardis-like house they live in and the curious treasures found within it. The children, Emile, Felice and George are lucky to each go to school in three seperate countries (Felice in Paris, George in New York and Emille in London), but that’s just the tip of the iceberg when it comes to what they discover their house can do. This is a story with a family at its heart. No one member of the family takes the lead, as the reader spends time with each of the children as well as parents Mr and Mrs Redmayne. Light humour and cream teas abound this story as the delicate tightrope the house and the family exist on, is shaken by naive and ill-advised tampering. There’s plenty of scope to expand on the Redmaynes’ story in the future. I would be interested to know more about the reasons for the children’s separate schooling - it would appear Mr and Mrs Redmayne chose where George went to school in New York and when I was reading initially I did wonder about the reason three separate countries had been selected. Overall, I liked the concept of this book. I found that the author gave plenty of time to develop the characters and the multiple settings and timeframes had been incorporated into the storyline seamlessly. A lot of background research and knowledge must have gone into making each setting feel authentic to the reader. This is a madcap adventure which I would say catered to a 10-12 age bracket in plot and theme with the exception of the single use of a swear word. As it is, readers around the age of 12 may find this a humorous adventure.

The Little House on Everywhere Street A most remarkable house, a most remarkable family—with secrets. The fabulous Redmaynes seem able to live every day in three cities at once: London, Paris and New York. Somehow. The three lucky Redmayne children—George, Felice, and Emile—believe they know all about their extraordinary house and its many secrets. But, alas, no, they do not. And when they begin to investigate, disaster strikes: George and Felice accidentally misplace their younger brother in time, with the result that the entire family must unite to find the poor lad and bring him home. A whirlwind plot ensues that involves Shakespeare, a ship’s monkey, a packet of M&Ms, a red pen, and one or two, erm, unfortunate changes to history. Can it all ever be put right? As it turns out, on this occasion, maybe not… All actions have consequences, Mr Redmayne remarks towards the close of this tale, and it may be that the Redmaynes must live with theirs. Forever. Simultaneously a rip-roaring adventure through time and space and the story of a family—and more specifically, about what makes for a happy family—this prize-winning novel will entertain and delight young adult readers of all ages. 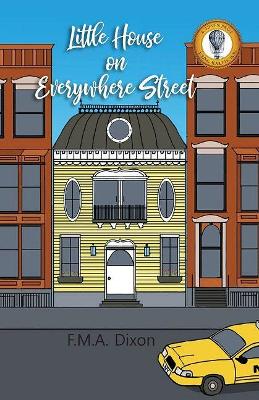