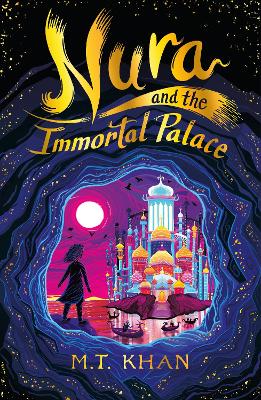 Nura and the Immortal Palace

"A world of magic, unbelievable splendour and trickery based on Muslim traditions"

Our young heroine Nura works hard in the mica mines to earn a little money, for a great deal of effort, to help support her family in this enthralling new fantasy series. Nura has heard tales all her life about the amazing Demon’s Tongue – a piece of mica that would make her so rich her family would never need to work again. She digs and digs, deeper and deeper, until her efforts contribute to a mine collapse in which her friend Faisal is missing.

Being as brave as she is foolhardy Nura sets off to try and rescue Faisal but instead falls into the realm of the jinn – ancient tricksters who prey on humans to be their slaves. Nura has been warned against jinn in all the stories her mother told her, but she just must find Faisal…

A powerfully told story of epic struggles to battle tricky jinn and rescue Faisal also has very strong themes of the wickedness of child exploitation by profit seeking industrialists underlined with the power of education to lift people from poverty. Based in Pakistan today, using the traditional Muslim tales of jinn that are timeless, Khan creates a fantasy adventure that can also help today’s child appreciate the inequalities and the dangers of modern life for those less fortunate than themselves. Perhaps this book will make some children appreciate the value of their own educational opportunities.

I really look forward to seeing more from Khan – a debut author to watch out for.

Nura and the Immortal Palace Synopsis

A magical adventure rooted in Muslim culture and tradition, Nura and the Immortal Palace follows a young girl's journey from modern-day Pakistan into the world of the jinn. Nura has worked all her life in the mica mines, earning just enough to keep her family afloat - and enjoy the odd delicious gulab jamun from the market. Some day she's going to find the Demon's Tongue, a legendary treasure buried deep in the mines, and her family will never have to worry about money again.

But when a terrible accident buries her best friend below ground, Nura goes in search of him and passes over into the magical and terrible world of the jinn. Across a pink sea and under a purple sky, she finds her way to a palace, where great riches and a whole new life are on offer.

It's not long before Nura discovers this world to be as unfair as the real one, and that trickster jinns will always live up to their reputation...

With gorgeous, atmospheric writing, M.T. Khan tells a bold tale that challenges greed and inequality as the tough and clever Nura fights the odds from the mica mines of rural Pakistan to a realm of jinn and magic. - Xiran Jay Zhao, #1 New York Times bestselling author of the Iron Widow and Zachary Ying series

Sparkling with magic, Nura whisks you from the mica mines of Pakistan to the dreamy and dangerous realm of the Jinn. A twisty, atmospheric tale with a fierce protagonist, whose voice lingered in my mind long after I'd finished reading. -- Jennifer Bell - author of Wonderscape

It was a delight to adventure with Nura into the magical and luminous world of the jinn. -- Jasbinder Bilan - author of Asha and the Spirit Bird

Both startling and beautiful. Nura will win your heart in the first pages of this magical adventure with surprises at every turn. - J.C. Cervantes

M.T. Khan weaves a magical tale brimming with themes of friendship, family, and hope - interspersed with delicious foods and enthralling lore. Readers will root for brave Nura from the gripping beginning to the breathtaking conclusion. Action-packed, heartfelt, timeless! - Katie Zhao

M.T. Khan is a SFF writer from Pakistan, now living in Canada. She focuses on stories close to her heart, evoking cultural and societal conversations through her works. When she's not writing, M.T. Khan has her nose deep in physics textbooks or glued to her CAD computer as she majors in Mechanical Engineering.

What scares you? Is it the shadows that flicker in the corners of your vision? The creak of the floorboards? The whispers from under your bed? For some kids, fear is the supernatural, restricted to spooky bedtime stories and campfire tales. Yet for our protagonist, Nura, fear is her reality.

As a child, I was blessed with a loving family, a roof over my head, and access to education that could hone my mind. But once I realized not every kid shared the same privileges, I started to wonder: what would an adventure from their perspective look like? That idea is at the heart of Nura and the Immortal Palace – a story about forgotten children, never seen and never represented, never the protagonists of their own stories.

Nura works as a mica miner, navigating dangerous tunnels to excavate lucrative minerals. As her mother works in a sweatshop and she has three younger siblings to feed, Nura hopes to find the fabled treasure buried deep within the mines. But when a terrible accident traps her best friend underground, she digs deeper to find him. Instead, she finds herself within an enchanting realm of pink seas and purple skies – the realm of jinn. Growing up, my mother used to tell me tales of invisible creatures, born of fire and mischief, who’d try to lead me astray if I got too lazy. Some with backwards feet or grizzly, towering horns; others that could fly and even disguise themselves as humans. They were jinn – creepier than the boogeyman and spookier than ghosts, because not all jinn necessarily have a purpose. Some just love to trick and swindle.

The story embodies this clash between humans and jinn. What is a jinn, if not childish? And what is a human, if not chaotic? Beginning at two opposite ends, Nura and the jinn soon discover a grey in-between where their values, emotions and motives can be strikingly similar. Beyond the magical, there is a sense of looming uncertainty. The sparkling dirt mentioned in this book, mica, is a real mineral, harvested globally in places like India, Madagascar and Brazil. In many cases, the method of excavating the mineral is illegal, deadly, and more often than not the workers hired for the job are children – some as young as five years old. Children younger than Nura.

This is a story about clutching on to hope despite your situation, about allowing yourself to yearn for more than just the food on your plate or nice clothes to wear – it’s about dreaming big. Because dreaming big shouldn’t feel like a luxury.