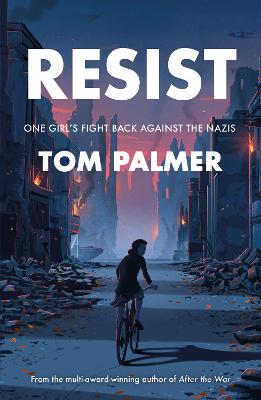 Resist: One Girl's Fight Back Against the Nazis

"Inspired by real life events, a tense, powerful story of resistance and survival in occupied Europe"

1t’s 1943, Edda is 14 and living in Velp in the Netherlands under German occupation. Young as she is, she is already risking her life working for the resistance, delivering newsletters and, more dangerous still, helping US airmen stranded behind German lines.

With typical economy and directness, Tom Palmer tells her story brilliantly, describing Edda’s heroism plus the fear and misery experienced every day by all those trying to live their lives as war rages around them with the same eye-level detail and insight. As often in Palmer’s books, this is inspired by a real person and somehow the story of this couragous young girl is even more remarkable when he reveals in the concluding pages that Edda van Heemstra grew up to be Audrey Hepburn, one of the most famous of all the Hollywood stars, though also a longtime ambassador for UNICEF.

Written for dyslexia specialist Barrington Stoke, the book is accessible to all readers and for many it is likely to prove unputdownable.

Resist: One Girl's Fight Back Against the Nazis Synopsis

As the brutal Second World War stretches on with no end in sight, life for ordinary Dutch people in the Nazi-occupied Netherlands is fraught with peril and hardship. There is very little to eat and the population lives under the constant threat of arrest and enslavement.

After the murder of her beloved uncle and the capture of her brother by the Germans, Edda is determined to do anything she can to help the resistance fight back against their oppressors. But what can a teenage girl do and how much risk is she willing to take?

Award-winning author Tom Palmer shines a light on the incredible work of the WWll Dutch resistance, in a story inspired by the childhood of Hollywood legend Audrey Hepburn.

'Tom Palmer is the master of accessible historical fiction ... A heart-wrenching story of strength, courage and sacrifice' - Kate Heap, Scope for the Imagination

More About Tom Palmer
Add To Wishlist
Buy from our bookstore and 25% of the cover price will be given to a school of your choice to buy more books.

The Secret in the Tower