The Extraordinary And Unusual Adventures Of Horatio Lyle

Part of the Horatio Lyle Series

The Extraordinary And Unusual Adventures Of Horatio Lyle

Part of the Horatio Lyle Series

The Extraordinary And Unusual Adventures Of Horatio Lyle Review

Witty, action-packed and perfect for fans of detective stories, fantasy stories and good old-fashioned adventure. Horatio Lyle is Sherlock Holmes crossed with Thomas Edison as written by Terry Pratchett. Catherine Webb published her first novel at just 14 and has quickly established herself as one of the most talented and exciting young writers in the UK and garnered comparisons with Terry Pratchett and Philip Pullman.

Her books are brilliantly plotted, time and place superbly portrayed and the characters wonderfully imagined. From Horatio Lyle, scientist, inventor and reluctant sleuth together with his faithful hound, Tate, side-kick, pickpocket Tess, a rebellious young gentleman called Thomas together they solve an almost unsolvable crime and survive a dangerous enemy. This was so good I was clamouring for more but thankfully the author has delivered with two further Horatio Lyle titles, The Obsidian dagger and most recently The Domesday Machine.

The Extraordinary And Unusual Adventures Of Horatio Lyle Synopsis

Horatio Lyle is Sherlock Holmes crossed with Thomas Edison as written by Terry Pratchett: witty, action-packed and perfect for fans of detective stories, fantasy stories and good old-fashioned adventure. In Victorian London at the height of the industrial revolution, Horatio Lyle is a former Special Constable with a passion for science and invention. He's also an occasional, but reluctant, sleuth. The truth is that he'd rather be in his lab tinkering with dangerous chemicals and odd machinery than running around the cobbled streets of London trying to track down stolen goods. But when Her Majesty's Government calls, Horatio swaps his microscope for a magnifying glass, fills his pockets with things that explode and sallies forth to unravel a mystery of a singularly extraordinary nature. Thrown together with a reformed (i.e. 'caught') pickpocket called Tess, and a rebellious (within reason) young gentleman called Thomas, Lyle and his faithful hound, Tate, find themselves pursuing an ancient Chinese plate, a conspiracy that reaches to the highest levels of polite society and a dangerous enemy who may not even be human. Solving the crime will be hard enough - surviving would be a bonus.

The Extraordinary And Unusual Adventures Of Horatio Lyle Press Reviews

'Catherine Webb is by any standards, a Writer, in the proper sense. She produces clever, surprising prose... Rich in action and character.' Sunday Times

'A hell of a romp, fuelled by the kind of unstoppable imagination that only the young can achieve' Sunday Telegraph 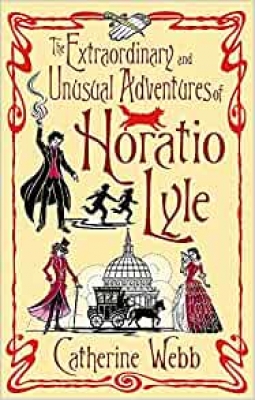 Catherine Webb was born 1986 and is a British author, educated at the Godolphin and Latymer School, London, and the London School of Economics. She was just fourteen years old when she completed Mirror Dreams, written during her school summer holidays. She sent her book of to a publisher who thoroughly enjoyed reading it. The book was published in 2002, and Webb was soon named Young Trailblazer of the Year by the magazine Cosmo GirlUK. Since then, she has gone on to write more books and has been favourably compared with Terry Pratchett (one of her literary heroes) and Philip ...

View All Books By Catherine Webb