Bestselling Robert Muchamore continues his series about the young runaway kids and now agents who, recruited as spies, help to win World War Two. Translating messages from the German top brass about Eagle Day, the date on which they intend to invade England, the agents and their leader Charles Henderson use their intelligence to hatch a plan to destroy the invasion fleet. High stakes and high tension make this a thrilling addition to the series. Click here to view the first in the Henderson’s Boys series together with the titles in the author’s other series – Cherub.

Guaranteed to set the pulse racing, Eagle Day is the second in the Henderson's Boys series from the bestselling and award-winning Robert Muchamore.  If you know anyone who thinks history is boring or dull then get them hooked on history through Muchamore's writing instead.  This series as well as his related Cherub series will inform and entertain like nothing else. With straightforward language; short snappy sentences even the most reluctant of readers will find this a straightforward and gripping series to read.

Comment from the author:
'In the Summer of 1940 Britain was fighting alone against superior German forces. Hitler planned to invade England before winter weather made it impossible and had set the invasion date for the second week of September.  These days living in Britain feels pretty secure, so it's hard to imagine what it must have been like with bombs dropping out of the sky and the imminent threat of a German invasion.  But of course, Henderson's Boys weren't going to sit back and let that happen.'

Be sure to check out the other Robert Muchamore titles by clicking here.

From Adolf Hitler, July 16th 1940: 'Despite her hopeless military situation, England shows no sign of willingness to come to terms. I have decided to prepare, and if necessary to carry out, a landing operation against her.'
.

As the Battle of Britain rages, Charles Henderson and four young agents must do everything they can to thwart Hitler’s plans to cross the channel and invade Southern England.  He is the last British spy left in occupied France in 1940, living on a farm near Calais with four runaway kids cut adrift by the war. He and his young agents are playing a dangerous game: translating for the German high command and sending information back to Britain about the Nazi plans to invade England in September, on Eagle Day. The RAF must destroy the Nazi invasion fleet, but Northern France is heavily defended and the camouflaged barges are impossible to target at night. Together, Henderson and his team hatch a daring plan to guide the British bombers to their target. Their lives are on the line, but the stakes couldn't possibly be higher.

PT BIVOTT - the one with the dodgy past:
Philippe Tomas Bivott – known to all as PT - was born in Chicago to first generation immigrants from France. His father was a talented thief, but when a robbery went disastrously wrong thirteen year old PT stowed away on a boat to Europe, with nothing but the clothes on his back and a sack stuffed with twenty dollar bills...By the age of fifteen PT has been fending for himself for two years. He’s worked as a cabin boy on cruise ships travelling to North Africa and cheated his way to a small fortune at the poker table. But is PT loyal to anyone other than himself?

PAUL CLARKE -  the artistic one:
Paul’s mother died from cancer shortly before the war, leaving him in the care of his British father, who worked as the French sales representative of the Imperial Wireless Corporation.  After his mother’s death, Paul’s father was urged to send his son to a school in Great Britain. However, Mr Clarke feared that a sensitive boy like Paul would fare badly in the tough atmosphere of a 1940s boarding school.  Instead, Paul remained in Paris where he attended an English language school and lived in a small apartment, with his father and his older sister.  Paul is slim and quiet. He’d rather spend time alone drawing, rather than hanging out with other kids.

ROSIE CLARKE - the one who isn't a boy:
Rosie was born in England but spent most of her early years living in Paris with her brother Paul and her father, Digby. Until the Germans invaded France she thought that her father was a wireless salesman, but when she finds out that he’s also an intelligence agent it’s her toughness and quick thinking that saves the day.  Rosie is tough, bossy and a natural leader.

MARC KILGOUR - the good-looking rebel:
Marc was abandoned as a baby at Beauvais station north of Paris. His mother was never found and he spent the first twelve years of his life living in an all-boys orphanage run by the catholic church.  Marc is popular and outgoing, although he can be painfully shy around girls.  His sheltered upbringing in a rural orphanage means he knows very little about the world beyond farming and schoolwork.  Marc’s average appearance belies a significant intelligence. His gift for foreign languages was recognised by a friendly teacher who taught Marc to speak German, a very useful skill in German occupied France.

For even more background on the characters in the Henderson's Boys series go to www.hendersonsboys.com. 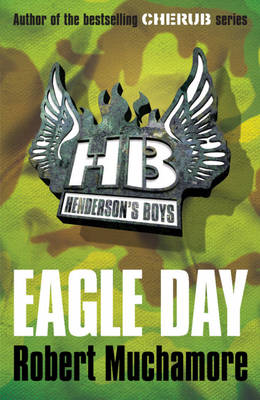