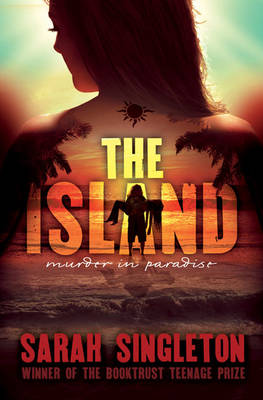 Put simply this is The Beach for teens. Three friends are on the start of their gap year in India but when one of them discovers a body of a girl he becomes the prime suspect. And, when he disappears his friends must endeavour to unravel the mystery surrounding the death in order to try and prove their friend’s innocence, without putting themselves at risk.

Otto, Jen and Charlotte have planned the trip of a lifetime to India for their gap year, before going their separate ways to university. For Charlotte, it's an opportunity to get involved in an environmental project and finally feel like she's doing something worthwhile; for Otto, it's the perfect opportunity to take some real photos to help his career as a photojournalistic; for Jen, it's the realisation of a lifelong dream. But when Otto discovers the body of a girl on the beach, things take a sinister turn as he finds himself a prime suspect in her murder. Together Otto, Charlotte and Jen start to unravel the mystery behind the girl's death. Can they discover the truth and clear Otto's name and even if they do will they be able to handle what they find as their dreams of paradise crumble around them...

Review of ‘The Island’ by Books for Keeps [4 stars]

Friends and gap year students, Otto, Jen and Charlotte are off on the trip of a lifetime to India. Charlotte plans to get involved in an environmental project; Otto to take pictures to help him in his proposed career as a photojournalist; and for sensitive and spiritual Jen, the trip feels like her destiny.

Arriving in Goa a few days ahead of the others, Otto is soon enjoying beach life to the full. But after he encounters the beautiful but mysterious Maria, paradise starts to pale and he finds himself at the centre of a murder investigation. By the time Charlotte and Jen arrive, Otto has been kidnapped, leaving his friends to grapple both with culture shock and a disturbing and dangerous mystery.

The Island invites obvious comparisons with Alex Garland’s novel The Beach: indeed it is billed as ‘The Beach’ for teens. But although The Island would certainly make an excellent beach book, it would be wrong to dismiss it as mere holiday reading. Singleton, as befits a former winner of the Booktrust Teenage Prize, has constructed a taut page-turner that is both highly atmospheric and psychologically complex. The personalities and motivations of each main character are fully explored. With the aid of flashbacks to their former lives in England, Singleton describes how the relationships between them have evolved, preparing the way for the seismic effect that India will have on each of them.

The seductiveness of Goa is beautifully evoked; its lushness, its dizzying heat and its strange, spiritual undercurrents. In surrendering to her chosen path, Jen feels the universe itself ‘pouring through her like a vast, black, shining river’. And the reader senses that they are on a journey of significance too; a quest not just to find out the answer to the mystery but to discover how easily expectations can be overturned, and self-knowledge shaken.

A shame then that this admirable novel, perfect for any post-exams teen looking to the future, is saddled with a cover which makes it look like the kind of cheap, throwaway holiday read it absolutely isn’t. Even the all-important tattoo is rendered as a sun rather than Nataraja’s ring of flames. But don’t let it put you off.

Sarah Singleton was born in rural Northamptonshire and holds an honours degree in English Literature and Language from the University of Nottingham. She travelled in Europe, India and Nepal, and worked variously with horses, in a chocolate shop, as a factory operative, and a chambermaid in Germany, before becoming a journalist.

In 1993 she married Brian Hoare, and they have two young daughters. Now, she lives in Chippenham, "in beautiful mystic Wiltshire," and works as a senior reporter for the Wiltshire Gazette & Herald, campaigns with a local human rights group, and is learning to play violin.

More About Sarah Singleton
Add To Wishlist
Buy from our bookstore and 25% of the cover price will be given to a school of your choice to buy more books.