LoveReading View on The Thief-taker's Apprentice

Tautly told, this gripping adventure tells how following one act of outrageous boldness a young cutpurse becomes apprentice to the city’s thief taker, a man driven by a powerful need to settle an old score. From his new master Syannis, Berren learns about how life is lived by those in power: he learns of greed, danger and corruption. Above all, he learns about killing. Berren’s imaginary city is full of recognizable people and emotions all of which are brilliantly conveyed in Stephen Deas’s spare and powerful storytelling.

Berren has lived in the city all his life. He has made his way as a thief, paying a little of what he earns to the Fagin like master of their band. But there is a twist to this tale of a thief. One day Berren goes to watch an execution of three thieves. He watches as the thief-taker takes his reward and decides to try and steal the prize. He fails. The young thief is taken. But the thief-taker spots something in Berren. And the boy reminds him of someone as well. Berren becomes his apprentice. And is introduced to a world of shadows, deceit and corruption behind the streets he thought he knew. Full of richly observed life in a teeming fantasy city, a hectic progression of fights, flights and fancies and charting the fall of a boy into the dark world of political plotting and murder this marks the beginning of a new fantasy series for all lovers of fantasy - from fans of Kristin Cashore to Brent Weeks. 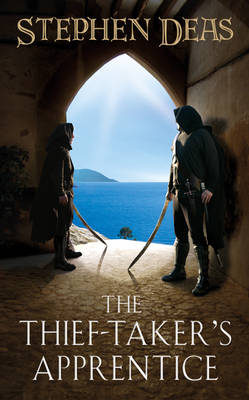 Stephen Deas was born in 1968. He once set fire to Wales. Well one bit of Wales. Twice. When not burning principalities, he played too much D&D. Despite this he managed to study theoretical physics at Cambridge, get a job at BAE, marry and have two children. He now lives in Essex. With The Adamantine Palace he plans to return to his first love; that of setting fire to things.

View All Books By Stephen Deas