Astrosaurs : Revenge of the Fang

Astrosaurs : Revenge of the Fang

Astrosaurs : Revenge of the Fang Review

Astrosaurs Series - No. 13. To save his schoolfriends Teggs must turn against the DSS and deliver top astrosaur secrets into enemy claws...But When Admiral Rosso finds out, Arx, Iggy and Gipsy are ordered to stop him by any means necessary! To put things right, Teggs must fight friends and foes alike...and his only ally is his biggest rival at Astrosaur Academy - exasperating diceratops Damona!

Astrosaurs : Revenge of the Fang Synopsis

Captain Teggs is no ordinary dinosaur - he's an astrosaur! Teggs has got serious trouble. His old friends Blink and Dutch from Astrosaur Academy have been dino-napped by a gang of his old enemies.

Steve Cole is also the author of a number of other bestselling series including Astrosaurs Academy, Cows in Action and Slime Squad.  To view them all go to Steve’s author page here on Lovereading4kids - click here. The Astrosaurs Academy series is a spin-off from Astrosaurs which began in 2008. The series focuses on Teggs Stegosaur while he’s at Astrosaurs Academy before he becomes an Astrosaur. 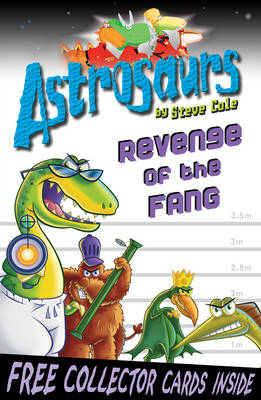