One of our Books of the Year 2013 & May 2013 Book of the Month   A comic strip comes to life with the help of some magic ink... a hilarious adventure that could only have come from the madcap mind of Mr Steve Cole, bestselling author of Astrosaurs, Cows in Action and Slime Squad! No child aged 7 or 8+ can fail to be hooked by the mind-blowing madness that ensues when Stewart's artwork gets out of hand!

Stewart Penders is a 12-year-old kid who loves comics. He loves drawing his own creations, especially the adventures of his fantasy alter ego, Stupendous Man! Part of his passion for comics comes from his late granddad, who was a great comic book artist. Granddad has just died, leaving his house and its contents to Stew's family. But when his family move in, they are greeted by a pig in a top hat running amok through the house. When Stew explores the house later, he finds a discarded comic strip in the attic - featuring an image of the very same pig they just saw - and beside it a mysterious pot of ink. When Stew starts drawing with it, his artwork springs into life. 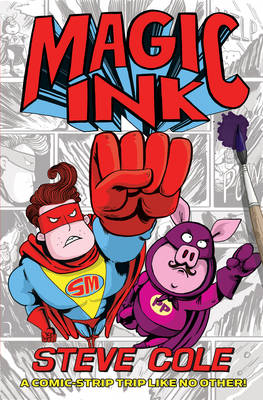