Percy Jackson and the Last Olympian

Percy Jackson and the Last Olympian

The Percy Jackson series is a deserved bestseller as it’s a clever and brilliantly crafted fusion of the worlds of gods and humans. Schoolboy Percy, son of Poseidon, knows from the prophecies that bad things will happen when he turns sixteen, but even he doesn’t know how bad those things might be! Now Percy must face down Kronos, Lord of the Titans, who has gone on the rampage and threatens to storm Mount Olympus. The clash of cultures and the clash of might, makes this a thrilling adventure.

Click here to see other titles in this superb adventure series which has sold over 1 million copies!...and visit www.rickriordan.com for more information on the exciting world of Percy Jackson.

Half Boy. Half God. All Hero. Most people get presents on their sixteenth birthday. I get a prophecy that could save or destroy the world. It happens when you're the son of Poseidon, God of the Sea. According to an ancient prophecy, I turn sixteen and the fate of the entire world is on me. But no pressure. Now Kronos, Lord of the Titans, is beginning his attack on New York City. And the dreaded monster Typhon is also heading our way. So it's me and forty of my demi-god friends versus untold evil... 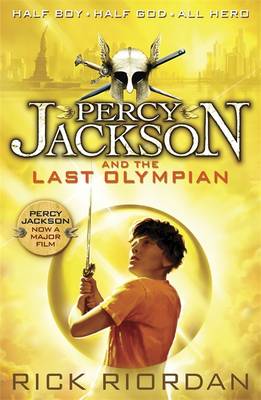