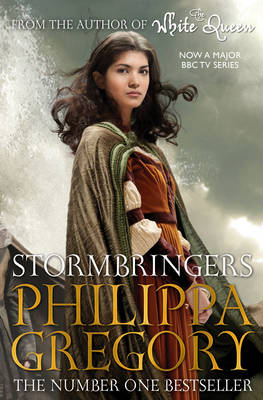 October 2013 Book of the Month  The second in this epic series, Order of Darkness, from the Queen of Historical Fiction.  Stormbringers is a dramatic adventure, witha hint of romance, set in medieval Europe after the fall of Byzantine empire.  Philippa Gregory excels in this new area of writing for a YA audience.  Her first novel in the series was the hugely successful Changeling - download an extract here!

Luca Vero is a member of the secret Order of Darkness, tasked with searching out and reporting signs of the end of the world. Breaking his journey in Piccolo, he finds a place filled with superstitious fears: of the unknown, of the forces of the sea and sky, of strangers. With him are his loyal friend and servant, Frieze, and his clerk, Brother Peter, as well as the Lady Isolde and her mysterious servant-companion Ishraq. The five of them are followed into the town by a huge children's crusade, led by a self-proclaimed saint. Its young leader promises that the sea will part before them, and allow them to walk dry-shod all the way to Jerusalem. Luca and Lady Isolde are swept up in the growing excitement; but something dangerous is brewing far out to sea...

Philippa Gregory was an established historian and writer when she discovered her interest in the Tudor period and wrote the international bestseller The Other Boleyn Girl, which became a major film starring Natalie Portman and Scarlett Johansson. Several books later, she is looking at the family that precedes The Tudors in the The Cousins' War series, which was televised by the BBC as The White Queen.

Philippa's other great interest is the charity that she founded nearly twenty years ago: Gardens for The Gambia. She has raised funds and paid for several hundred wells for the primary schools of this poor African country. A former student of Sussex University, and a PhD and Alumna of the Year at Edinburgh University, her love of history is the hallmark of her writing. She lives with her family on a small farm in Yorkshire.

More About Philippa Gregory
Add To Wishlist
Buy from our bookstore and 25% of the cover price will be given to a school of your choice to buy more books.