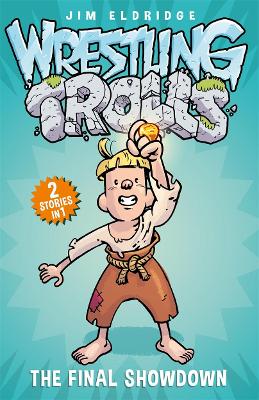 The Wrestling Trolls face their ultimate challenge - a fight for the troll kingdom! Lord Veto has been kidnapped and is being held at the dreaded Mount Doom. But now Jack knows the shocking truth - that his arch enemy is in fact his grandfather - he can't just abandon him. So the gang find themselves on the most unexpected mission of all: to save Lord Veto. But are they walking straight into a trap? In the second and final story the Wrestling Trolls face their most terrifying opponent yet. As the rightful heir to the troll throne, Jack must defeat Massive, the tyrannical troll who claims that he is the High King. In a wrestling match to end all wrestling matches, Jack must save not only himself, but his friends and his kingdom too. In this thrilling final adventure in the Wrestling Trolls series, the gang must pull together - even with their enemies - to fight for the very future of trollkind.

Jim Eldridge is an award-winning writer of 79 books which have sold over 3 million copies worldwide. He has also written over 250 TV and 250 BBC Radio 4 scripts. His television works including THE GHOST HUNTER, JULIA JEKYLL AND HARRIET HYDE and the Sci-Fi series POWERS, among many others. Jim is particularly concerned with the rising rate of illiteracy, especially among boys. He now lives in Kent with his wife. Follow Jim at: www.jimeldridge.com. Jan Bielecki is an illustrator living in London. He has published two graphic novels and illustrated books for UK and Swedish publishers. DRIFT was nominated for Best Graphic Novel by the Swedish Comics Association in 2007. He drinks a lot of coffee. Follow Jan at www.janbielecki.com or on Twitter: @janbielecki

More About Jim Eldridge
Add To Wishlist
Buy from our bookstore and 25% of the cover price will be given to a school of your choice to buy more books.