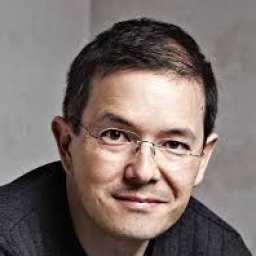 Shaun Tan was born in 1974 and grew up in the northern suburbs of Perth, Western Australia. In school he became known as the “good drawer” which partly compensated for always being the shortest kid in every class. He graduated from the University of WA in 1995 with joint honours in Fine Arts and English Literature, and currently works full time as a freelance artist and author, concentrating mostly on writing and illustrating picture books.

Shaun began drawing and painting images for science fiction and horror stories in small-press magazines as a teenager, and has since then he has received numerous awards for his picture books, including the CBCA (Children’s Book Council of Australia) Picture Book of the Year Award for The Rabbits with John Marsden. In 2001 Shaun was named Best Artist at the World Fantasy Awards in Montreal. He has recently worked for Blue Sky Studios and Pixar, providing concept artwork for forthcoming films. He has worked as a theatre designer, a concept artist for animated films including Pixar's WALL-E and directed the Academy Award-winning short film, The Lost Thing in 2011. In the same year, Tan received the Astrid Lindgren Memorial Award, honouring his contribution to international children's literature.

Shaun Tan on himself and Eric:

"Drawing a good picture is like telling a really good lie – the key is in the incidental detail," says Shaun Tan.  (interview with Guardian Online, 2009)

“A recurring theme in my sketchbook are characters carrying a suitcase. I’m not sure why. Sometimes it arises because I’ve drawn a character and they look silly standing there without anything in their hands, so I’ll often add a suitcase or a box. This constantly suggested a story.   The story ‘Eric’ in Tales from Outer Suburbia was suggested by a similar drawing of a little character with a pointy head and the word Eric written underneath.

I do rarely give names. 'Eric' is an exception, but even then the name is a substitute for something we can’t hear or pronounce properly, so we never know his real name.”   (interview with Write Away, 2009)

Tales from the Inner City

Winner of the CILIP Kate Greenaway Medal 2020 | In this mind-blowingly beautiful book comprising twenty-five tales, visionary artist and writer Shaun Tan turns his attention to the relationship between humans and animals in varied urban contexts. A rhino on a motorway. An owl at the side of a hospital patient. An eagle spied at multiple international airports. Giant snails declared “indecent” by the public. Dreamlike, mysterious and poignant, this is a book to pore over. Both words and illustrations lend themselves to multiple readings, each experience unearthing alternate interpretations, new discoveries, fresh ways of seeing the world. What a sublimely strange feat this is.

Shortlisted for the 2015 CILIP Kate Greenaway Medal Combining humour and surreal fantasy, Shaun Tan pictures a summer in the lives of two boys. Each spread tells of an event and the lesson learned. By turns, these events become darker and more sinister as the boys push their games further and further.

Other books by Shaun Tan

A beautifully poignant gift book exploring the relationship between man and man's best friend, from the masterful Shaun Tan. One day I threw my stick at you. You brought it back. Then we were walking side by side as if it had always been this way. World-renowned artist and storyteller Shaun Tan reflects on the nature of humans and animals in this exquisitely illustrated fable about owner and Dog. A perfect little gift book from an extraordinary talent.

The Bird King: An Artist's Sketchbook

Award-winning artist Shaun Tan brings his story-making to life in this beautiful sketchbook, now with brand new content. A treasure trove of sketchbook pages, jottings, doodles and drawings from life reveal much about Shaun's personal style and themes in this inspiring collection. Extensive brand new content includes pencil sketches for upcoming books, development work for Eric and cover design ideas for Cicada, along with new oil paint landscape sketches and character studies. This is a must-have for any Shaun Tan fan, particularly art and illustration students, as well as any lover of story and the creative process.

Pictura is a stunning range of black-and-white art to collect and colour for all ages. This large poster book format includes 12 prints, which can be removed from the book, coloured in and displayed on your wall. In this title from the urban strand, industry is born from an egg as other animals and plants look on. As it grows, metal trades metal, towns march and skyscrapers smoke, until all converge in a powerful, violent Metropolis. This mind-blowing creation myth from the inimitable Shaun Tan is yours for the colouring.