Born on 4 June 1879 to a large family in the East End of London, Mabel Lucie Attwell had a strict Victorian upbringing. Her father, a butcher, progressive thinker and homeopath, was eccentric and stern. She loved her parents and respected the perfection her father strove for, but her childhood lacked warmth, and her early drawings reflected her yearning for comfort and affection.

By the age of sixteen, Mabel Lucie had sold her first drawings and was able to fund her own further education. At Saint Martin’s Art School, she fell in love with the artist Harold Cecil Earnshaw, who later became her husband and the father of her adored three children. A huge commercial success in her lifetime, Mabel Lucie produced Christmas cards for the Royal Family (including a personalized one for Princess Margaret), illustrations for magazines such as Tatler, advertising campaigns for the London Underground and
artwork for several children’s classics. Her characters were produced on everything from tableware to textiles, postcards and figurines.

With her illustrations much in demand, she bought a house in Surrey, to which she and Harold moved in 1910. She invented The Boo-Boos during this time, an illustrated series about cheeky ‘do-good’ fairies,
whose tales she wrote herself. She was also commissioned to illustrate many children’s classics, including a beautiful edition of Alice in Wonderland, published in 1911, and an edition of Peter Pan and Wendy
in 1921, the latter at the specific request of the author J. M. Barrie. Throughout her life, Mabel Lucie was extremely hard-working, producing a huge body of work. She had a strong personality, was a stylish London socialite and was fiercely independent, though her heart always lay at home with her family. In 1937 her adored husband Harold died from the effects of his war wounds, aged only fifty-one, and she coped with her grief by working even harder, her popularity never dwindling.Mabel Lucie’s illustrations were used for postcards and advertising during both World Wars, her tongue-in-cheek captions encouraging the nation to ‘smile through the tears’.

Mabel Lucie Attwell died peacefully in Cornwall on 5 November 1964. Her illustrations are timeless and retain their familiarity and collectable appeal today. 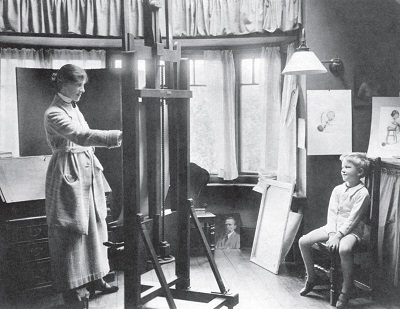