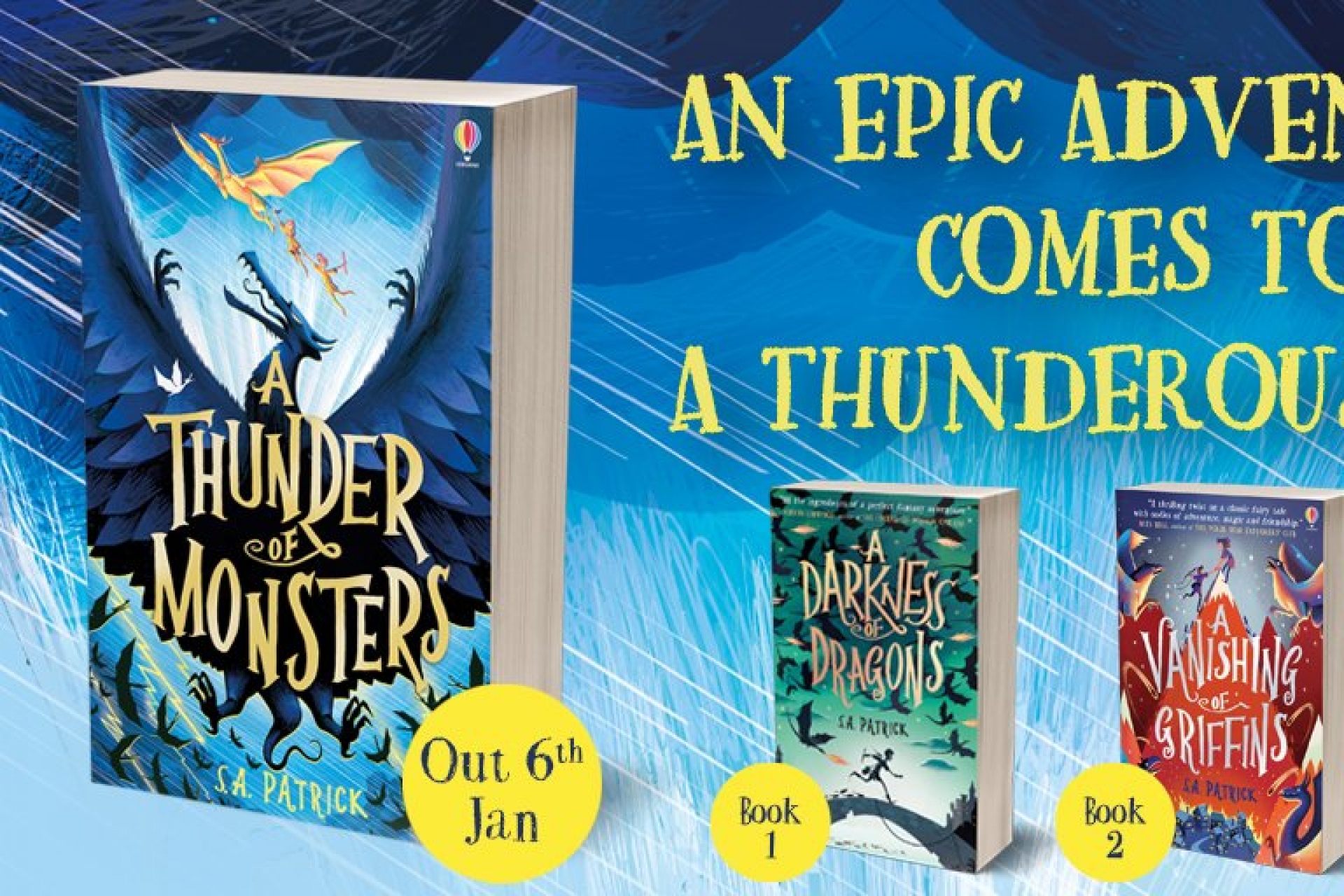 Songs of Magic - Our Series of the Month

Songs of Magic is a sparkling fantasy adventure overflowing with dragons, excitement and humour taking inspiration from the legend of The Pied Piper of Hamelyn. Fans will be excited to read the final book in the series, A Thunder of Monsters, that publishes this month and brings this epic adventure to a thrilling end!

Meet the heroes of the piece.. 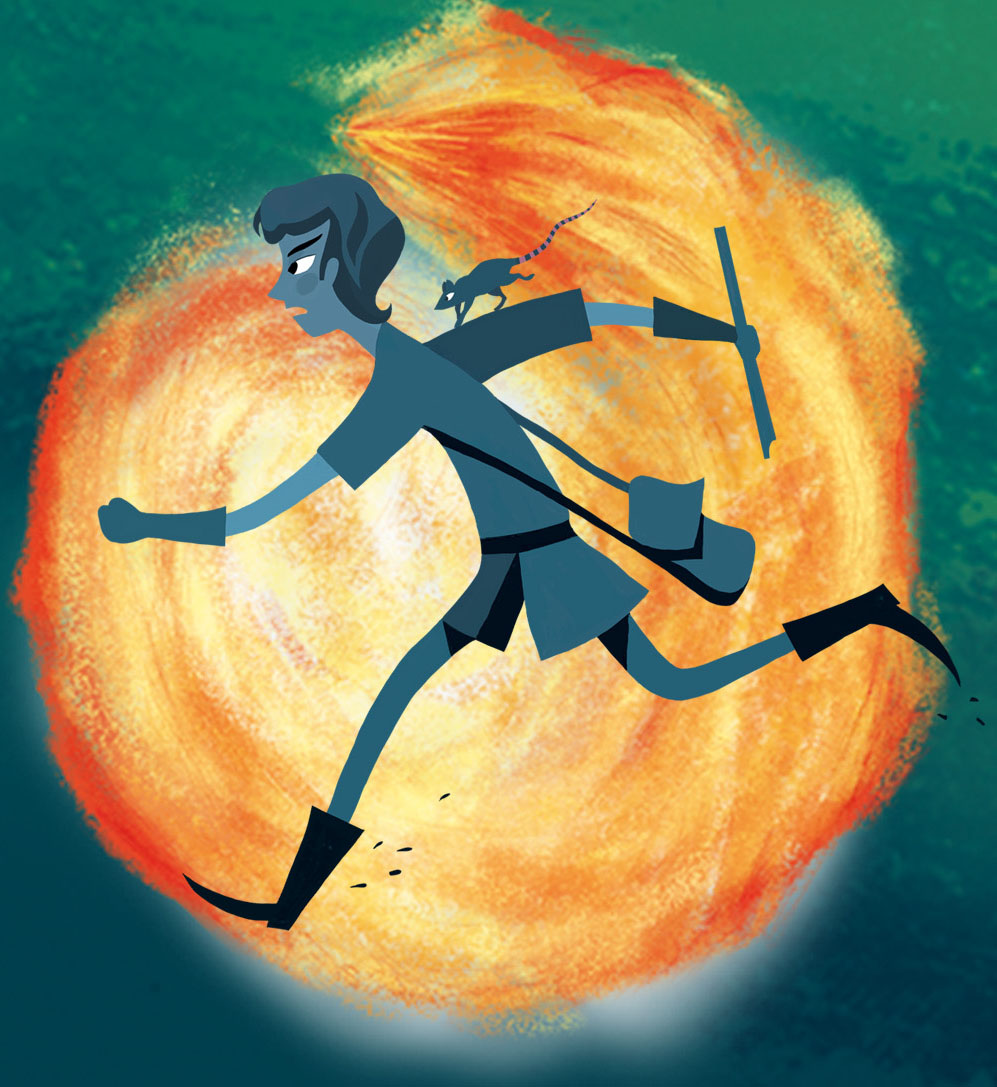 Patch is a thirteen year old boy, a very talented piper who was thrown into jail for playing a forbidden song. He's an idealist who wants to make the world a better place. Now on the run he inspires loyalty from his two friends and, swept up in a story not of his own making, he's determined to seek out truth and justice. 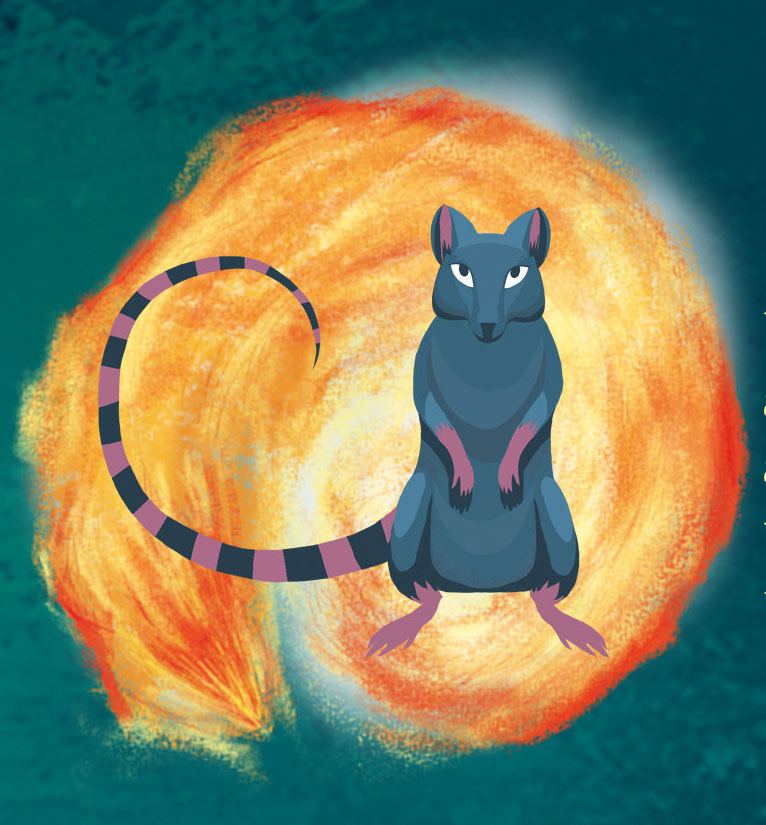 Wren is a thirteen year old girl who has been turned into a rat by a wicked sorcerer. She is searching for a cure to become human again. Patch teaches her sign language so they can communicate together - she's clever, funny, resourceful and amibitous.

Barver is a dracogriff - half dragon half griffin. He seems frightening, he's battle-hardened but full of strength and fortitude. He's a loyal friend, kind and brave.

We asked the author, SA Patrick, a few questions to help introduce our readers to his epic new series;

We love the setting for your stories and the idea of taking the Pied Piper of Hamelyn’s story as a starting point. How did the idea come to you?

It started as an idea I had for a game based around rhythm and melody. I needed a setting for the game, and the Pied Piper story was a perfect fit. I didn’t want the player to be the villain, though, so I decided to set it in a world with lots of magical pipers, and make the player an apprentice. I got more and more interested in the world I was creating, and less interested in the game idea…

Music and songs are powerful magic in your stories.  Are you a musician yourself?

I have a keyboard, and I play around with creating music on my computer, which I love to do - but let’s just say I’m a long way from being a musician!

Do you find aspects of yourself and people you know appearing in your books?

That kind of thing definitely creeps in. There’s certainly an aspirational element too, where characters show strengths you wish you had.

You have been a games programmer as well as an author, what do you like best about creating worlds and adventures with words?

Working on games, the teams tend to be so large that programmers rarely get to make the really big creative decisions. As an author, though, you get to shape a book any way you want.

What was your favourite fantasy adventure as a child, and which fictional heroic character did you want to be?

I was a Star Wars kid, really – I wanted to be Luke Skywalker. The Last Starfighter also hit home – I mean, to be great at video games and save the universe? Yes please.

What’s your favourite scene in your books and why?

I have a soft spot for the scenes where Patch meets Wren and Barver. It’s just the thought of the three of them meeting their best friends for the first time…

Are your own bookshelves full or do you prefer reading on an electronic device?

I prefer the real thing – I often have to flip back a bit to remind myself of things or check I didn’t get the wrong end of the stick, which is much easier with a physical book.

On the other hand, while the library was closed recently I used my e-reader far more, and got on with it much better than I’d expected.

Perhaps they think people only want to read reviews of books they would read themselves. This is nonsense, of course – for a start, parents and grandparents will always want to discover new books for their kids and grandkids. It also assumes that most adults wouldn’t read children’s books. If that’s true, it’s a great shame – since I started writing for children, more than half of what I read is children’s fiction. People don’t know what they’re missing. Perhaps if they knew, they wouldn’t miss out.

Sites like LoveReading4Kids do a great job of championing children’s books, so I think parents who take an active interest in helping their kids choose books are well served. Even so, the amount of coverage children’s books get in print media and television is pitiful, and that’s shameful. They would surely agree on the importance of literacy for children, yet can’t bring themselves to actively support it by routinely giving more prominence to children’s fiction.

I find audio books so soothing that I nod off very easily! So that scuppers them for me, really.

You'd need someone lively to narrate the Songs of Magic series then...who would you choose?

Well, I’d have to pick someone who could take action, drama and humour in their stride, and who always brings something special to whatever they do. So if I had a free choice I’d have to pick Jason Isaacs or Thandie Newton, obviously!

Read our reviews, and download the first chapter, of A Darkness of Dragons, A Vanishing of Griffins. and the final book, A Thunder of Monsters. 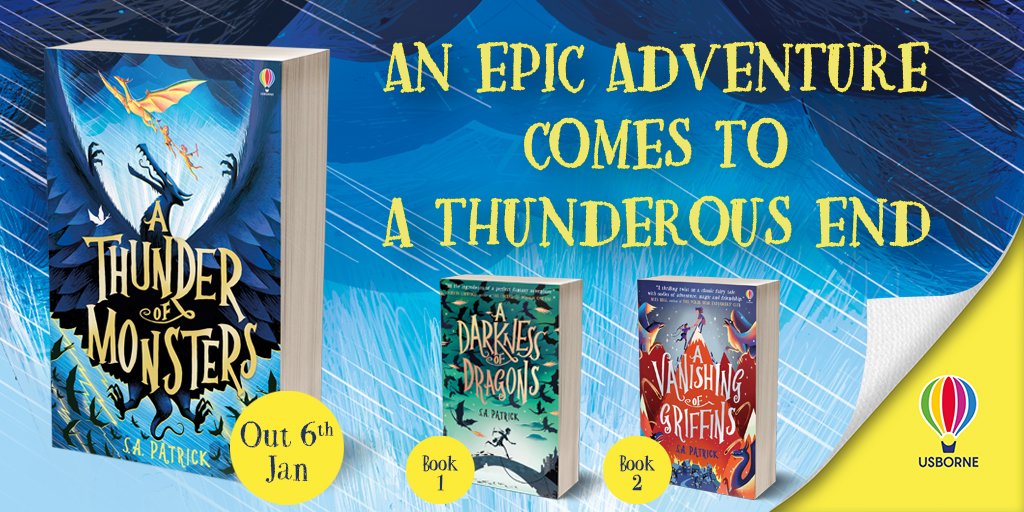 A boy with a special talent, a girl transformed into a rat by magic, and a fire-breathing young dracogriff (half dragon, half griffin) – three friends, three unlikely heroes! In S A Patrick’s sparkling fantasy adventure they face sorcerers, bandits, imprisonment and mercenary armies, plus betrayal by the people they should be able to trust the most, and they face them all with courage, loyalty to each other and humour. Their arch enemy is the legendary Pied Piper no less, supposedly imprisoned for what he did in Hamelyn, but actually free and planning more wickedness against humans and dragons alike.  It’s a story full of adventure and excitement, as well as characters readers will root for from the first – and best of all, there’s a sequel!   Readers who enjoy Patch, Wren and Barver’s adventures will also enjoy Abi Elphinstone’s Rumblestar series and Michelle Harrison’s Widdershins Adventures.

Fans of S A Patrick’s fantasy novel A Darkness of Dragons will snatch up this sequel with real excitement – after all, in Patch Brightwater, Wren Cobble and Barver Knopferkerkle, he’s created the kind of characters readers really miss when the book ends. Reunited for more adventures, the three are faced with challenges and dangers galore as they try to thwart the wicked Hamelyn Piper. First on their to-do list however, is to rescue Patch’s friend Erner Whitlock from some very deep dungeons… The world the friends inhabit is full of surprises, for them as much as for readers, and their adventures crackle with magic and suspense. If you enjoy going on quests, untangling prophecies and, of course, spending time with characters who are brave, loyal and very good company, then these are the books for you.

January 2022 Book of the Month | Patch Brightwater and his friend Barver, the dracogriff, are trapped on a mysterious island full of monstrous beasts. Their shapeshifting friend, Wren, is being held prisoner by the Piper of Hamelyn, but she's working hard to escape. Clad in his suit of magical black armour and with dragons and a growing army on his side, the Piper of Hamelyn seems destined to bring chaos and destruction down on the world. Can anything stop him? Three accidental heroes versus one legendary villain...the epic adventure that began with A Darkness of Dragons comes to a thunderous end.