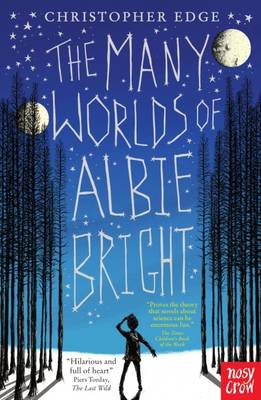 The Many Worlds of Albie Bright

Even physicists struggle to understand quantum theory but Christopher Edge makes a very fine attempt at an explanation, though the most striking thing about his story is actually not the how of quantum physics, but its particular why: Albie - named after Einstein of course – has a very good reason to make like Schrödinger’s cat because in a parallel world the mum he’s just lost to cancer could still be alive. Using his mum’s scientific theories, laptop, Geiger counter and a banana (they’re radioactive), he manages to create a wormhole through the fifth dimension and reach parallel worlds. This provides multiple opportunities for Back-to-the-Future-style comic confusion, though eventually Albie finds the consolation and comfort he needs back where he started. A clever, funny and very touching novel. ~ Andrea Reece

Readers who enjoy this will also like Ross Welford’s Time Travelling with a Hamster, another funny, warm-hearted novel about family and time travel.

A message from the Editor: “This is a funny, moving and exciting novel. Like Albie, the reader never knows where they'll end up, what they'll find, or whether they'll ever get back home again…"

The Many Worlds of Albie Bright Synopsis

When Albie's mum dies, it's natural he should wonder where she's gone. His parents are both scientists and they usually have all the answers. Dad mutters something about Albie's mum being alive and with them in a parallel universe. So Albie finds a box, his mum's computer and a rotting banana, and sends himself through time and space to find her...

Christopher Edge is an writer, freelance publisher and education consultant as well as an accomplished author of children's books.

Christopher grew up in Manchester where he spent most of his childhood in the local library dreaming up stories, but now lives in Gloucestershire where he spends most of his time in the local library dreaming up stories. Before becoming a writer, he worked as an English teacher, editor and publisher – any job that let him keep a book close to hand. When not writing, he also works as a freelance publisher and education consultant and has written publications about encouraging children to read.

More About Christopher Edge
Add To Wishlist
Buy from our bookstore and 25% of the cover price will be given to a school of your choice to buy more books.