A special collector's edition of Patrick Ness's original prize-winning illustrated novel and the remarkable story behind the book and film. Patrick Ness displays brilliant new skills of sensitivity in this hauntingly touching story of how a boy deals with the looming threat of his mother’s death from cancer. Haunted by a monster in his dreams, denied much information by his family and treated as a weirdo by his class mates and a ‘special case’ by his teachers, Conor struggles to get to grips with the devastating emotions which threaten to overwhelm him.

Winner of the 2012 Carnegie Medal   Rachel Levy chair of the 2012 CILIP Carnegie judging panel said: "A Monster Calls" is an exquisite piece of writing. It is a beautifully economical, structurally brilliant and lyrically descriptive account of a challenging episode in one child's life."

Click here to view the paperback movie tie-in edition of A Monster Calls.

In this special collector's edition, discover Patrick Ness's original prize-winning illustrated novel and the remarkable story behind the book and film. In exclusive essays and interviews, read how Patrick Ness created a modern classic, and discover Jim Kay's previously unseen sketches for the book.

Hear from acclaimed director J.A. Bayona, and go behind the scenes with actors Liam Neeson, Sigourney Weaver and Felicity Jones to find out how the film was made. Full of never before published material and haunting pictures, this stunning edition gives a fascinating and unique insight into the making of both the book and film. A must for all fans.

Conor has the same dream every night, ever since his mother first fell ill, ever since she started the treatments that don't quite seem to be working. But tonight is different. Tonight, when he wakes, there's a visitor at his window. It's ancient, elemental, a force of nature. And it wants the most dangerous thing of all from Conor. It wants the truth. Patrick Ness takes the final idea of the late, award-winning writer Siobhan Dowd and weaves an extraordinary and heartbreaking tale of mischief, healing and above all, the courage it takes to survive. 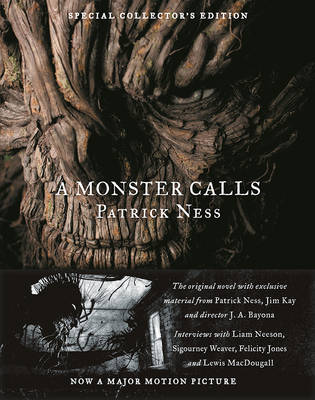