Astrosaurs Series - No. 7. Astrosaurs are a really collectable series offering dramatic space travel stories peopled with dinosaur characters. Teggs is captain of the amazing spaceship DSS Sauropod. With his dinosaur crew, he travels through space fighting evil and doing good wherever he can. This time, DSS Sauropod is sucked into a black hole. Will the crew get out alive? And will things ever be the same again?

Captain Teggs is no ordinary dinosaur - he's an astrosaur! On the incredible spaceship DSS Sauropod, along with his faithful crew, Gypsy, Arx and Iggy, Teggs rights wrongs, fights evil and eats a lot of grass! The crew of the Sauropod hit trouble when their ship is pulled into a strange, tiny black hole. Spat out in the DSS HQ, they meet up with their boss, Admiral Rosso, who is behaving a little oddly. And when the rest of the astrosaurs begin to show signs of weirdness, Teggs decides to investigate. The clues seem to point to some kind of dino-droid! Can the astrosaurs work out what's really going on? 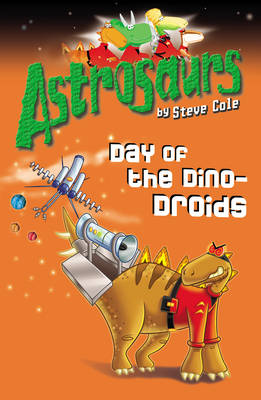