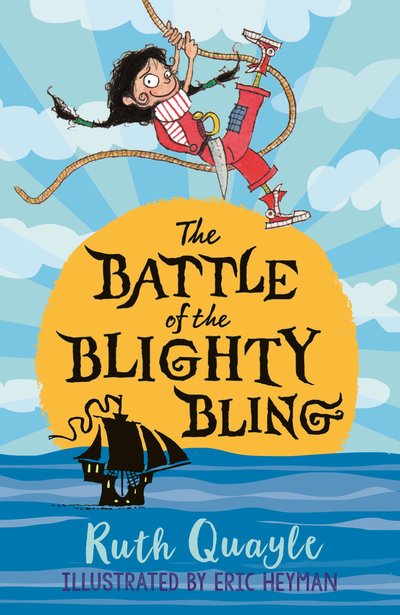 The Battle of the Blighty Bling

Pity the poor McScurvy children, Vic and Bert – they used to sail the ocean with their pirate parents, until they lost their ship.  Now they have to wear shoes and do homework.  And their baby sister Maud is an absolute terror, a blue-eyed, golden-haired tyrant!  Maud it is who sparks the adventure, one that will bring the children – and some newly made frenemies – up against Captain Guillemot the Third, aka the Hipster Ripster. At stake is their ship, their future, and the family treasure the Blighty Bling. It’s fast and funny, and a great example of kids versus adults adventure: the junior McScurvys may squabble a bit, but they are loyal, brave and determined.  Great fun, and Eric Heyman’s black and white illustrations add to the sense of excitement and adventure.

The Battle of the Blighty Bling Synopsis

Vic and her younger brother and sister Bert and Maud have been left alone at home, which means they will surely get into mischief. But not just any ordinary kind of mischief, because Vic and her family are PIRATES. The only problem is, Dad sunk the family pirate ship and now the family is stuck in a caravan by the sea. So when the kids accidentally lose the family pirate treasure, the legendary Blighty Bling, it's up to them to take to the high seas in a leaky rowing boat and get it back, with their annoying know-it-all neighbours in tow. But their swashbuckling adventure runs into a few problems when they meet their pirate enemy, Captain Guillemot, and Vic discovers a few home truths along the way...

Ruth Quayle used to work as a journalist and copywriter, and was inspired to write books for children by the funny things her own kids said. Ruth lives in London with her family and when she's not writing, you'll find her stepping on bits of lego, burning fish fingers and trying to convince the children that there really isn't room for a dog.

Perfect for fans of The Accidental Pirates series, Abi Elphinstone and My Brother is a Superhero.

Escape the Rooms (the laugh-out-loud funny and mind-blowingly brilliant new book for kids!)

My Parents Cancelled My Birthday 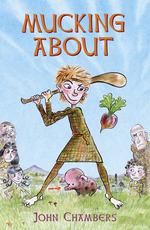