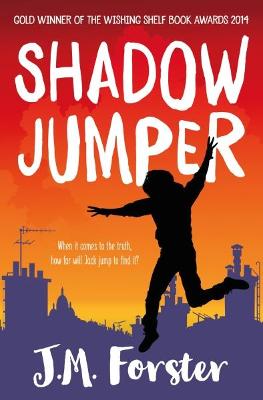 "A family story wrapped in a mystery of a missing parent."

Jack is a lonely teen. His allergy to the sun puts lots of challenges in his path, his only hobby is “shadow jumping” across his local skyline at dusk. One almost calamitous evening taking part in this hair-raising activity, Jack crosses paths with Beth. A new friendship in the nick of time, as Jack’s skin is getting worse and he desperately needs to find his scientist Dad to try and find a solution. But will digging up the past and its dark rumours lead to Jack’s Dad?

‘The Shadow Jumper’ by J. M. Forster is an interesting family story about a newly separated family. I liked the way that the thread of the story is buried under the mystery of Jack’s Dad’s whereabouts. I also liked the friendship that developed between Beth and Jack, it has its ups and downs, but the pair offer so much support to one another.

This is a well-written story about friendship and family that is filled with surprises, twists and turns. The outcome may not be what you’d expect, but the journey offers entertainment and food for thought.

A thrilling mystery adventure with contemporary themes, for children aged 10 and above.

The truth is out there somewhere ...but how far will Jack jump to find it? Jack Phillips's allergy to sunshine confines him to the shadows, leaving him lonely and at risk of life-threatening burns every time he steps into the light. Shadow jumping on the rooftops at dusk makes him feel alive. And free. But Jack's condition is suddenly worse than ever and only his missing scientist dad can save him. As Jack and his new friend, Beth, begin their frantic search and delve into his dad's past for clues, they have no idea what they are about to uncover.

Shocking rumours and dark secrets bombard them at every turn. Shadow Jumping takes courage. But when it comes to the truth, will Jack be brave enough to face it?

J M Forster is an award-winning writer of books for children and young teens. She lives in Gloucestershire with her husband, two sons, Ben and Louis, and Frodo, the Australian labradoodle. Her first attempt at writing was when she was nine years old. That manuscript is still somewhere in the attic being looked after by the spiders. Shadow Jumper, her popular mystery adventure for 9 year olds to young teens, has now been joined by a long-awaited sequel, Twilight Robbery. J M Forster has also published Bad Hair Days, a touching mystery about family, friendships and being different.

More About J. M. Forster
Add To Wishlist
Buy from our bookstore and 25% of the cover price will be given to a school of your choice to buy more books.

The Keeper of the Stones

The Undergrounders & the Deception of the Dead

The Undergrounders & the Flight of the Falcon

Luke Stevens and the Blood of St George