LoveReading View on How To Speak Dragonese

Hiccup the great Viking hero was not always such a star. He makes a mistake in his first Boarding an Enemy Ship Lesson by tackling a Roman Dragon Rustling ship with the fearsome Alvin the Treacherous on board. When Toothless, the hero’s dragon, gets captured, Hiccup needs all his skills to get him back. How will he do so when Alvin steals his copy of How to Speak Dragonese?

How To Speak Dragonese Synopsis

THE STORY CONTINUES in the third volume of Hiccup's How to Train Your Dragon memoirs ...Haddock III was an awesome sword-fighter, a dragon-whisperer and the greatest Viking Hero who ever lived. But it wasn't always like that. Hiccup's memoirs look back to when Hiccup was just an ordinary boy, and finding it very hard to be a Hero. Climbing on to a Roman Dragon Rustling ship by mistake in your first 'Boarding an Enemy Ship' lesson is bad enough. But to then discover that Alvin the Treacherous is also on board proves to Hiccup he couldn't have been more wrong, especially when he steals his copy of How to Speak Dragonese. Can Hiccup save the dragons and the day? How to Train Your Dragon is soon to be a DreamWorks film starring Gerrard Butler, America Ferrera and Jonah Hill, out in March 2010 adapted from the best selling How to Train Your Dragon series by Cressida Cowell. Read the rest of Hiccup's exploits in the How to Train Your Dragon series in How to Train Your Dragon, How to Be a Pirate, How to Cheat a Dragon's Curse, How to Twist a Dragon's Tale, A Hero's Guide to Deadly Dragons, How to Ride a Dragon's Storm, and How to Break a Dragon's Heart. Check out the all-new Hiccup website at www.howtotrainyourdragonbooks.com It's the place to go for games, downloads, activities and sneak peeks! Read all about Hiccup and all of your favourite characters, learn to speak Dragonese and train your own dragon to do tricks!

How To Speak Dragonese Press Reviews

'If you haven't discovered Hiccup yet, you're missing out on one of the greatest inventions of modern children's literature.'
Julia Eccleshare, Guardian children's editor

'This book is great fun and has a Blackadderish sense of humour ... full of the sort of jokes that will make schoolboys snigger.'
Nicolette Jones, The Sunday Times 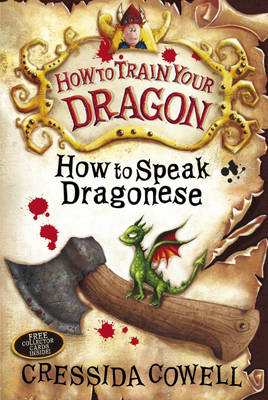