LoveReading View on Billy the Kid

This is a book for every generation to share but in particular for a grandfather to share with his grandson for this is the story of Billy, a supremely talented footballer who at 19 was picked to play for one of the top clubs. But it was 1939 and his life changed at the start of World War Two.

So here in Billy the Kid he tells his story but he intersperses it with a story about a group of youngsters who are playing football in the park; in the park he scored his first goal in over 70 years ago. Billy’s memories bring both joy and sadness to the book but first and foremost it’s a story for us all; to ensure we never forget the hardships his generation went through in order to bring future generations the country we now take for granted.

With the most wonderful nostalgic illustrations by Michael Foreman it’s a moving and inspiring tale.

Billy's no kid - he's eighty today. He's enjoying watching the boys in the park knock a football around and this afternoon he'll be cheering on his team, Chelsea, as he has done all his life. In 1939 Billy was picked for Chelsea. Not quite nineteen, and his dreams had come true: 'Billy! Billy the Kid!' they shouted as he scored goal after goal. Surely life could get no better. But in 1939 too, the Second World War began and Billy's life was never to be the same again. Through the story of Billy the Kid, Michael Morpurgo reaches across the generations and with Michael Foreman's nostalgically vivid illustrations, creates a life with a past that will be moving and inspiring for young and old alike. 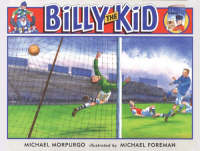