Part of the The Donut Diaries Series

LoveReading View on The Donut Diaries

Hot on the heels of the success of The Wimpy Kid this diary will strike a chord with all those who love to see life through the eyes of twelve year old Dermot Milligan. Dermot starts his diaries when he is threatened with Camp Fatso and is told he must lose weight. To help he has to write down what he has eaten and even worse, what he is thinking. Dermot’s diaries are very revealing as he tells all in hilarious and embarrassing detail.

A British Diary of a Wimpy Kid , featuring Dermot, an overweight eleven-year-old, is hilariously funny and insightful. Dermot Milligan's got problems. He's overweight and hooked on donuts. He has a pushy, over-achieving mother, and a father who spends all his time hiding in the loo. His sisters, Ruby and Ella (known as Rubella) attack him relentlessly from the opposite directions of Chav and Goth. And now, he's being sent to a nutritionist, Doctor Morlock, who looks like a Dementor from Harry Potter and the Deathly Hallows. This diary is Doc Morlock's idea. Not only does Dermot have to write down how many donuts he eats, but also - and this is the really rubbish part - he has to talk about his feelings! But things are about to get even worse - he's being separated from his friends and sent to St Michael's, a posh school where he just knows he's going to stick out like a sore thumb. A sore thumb with a weight problem...

Anthony MacGowan reads from The Donut Diaries in this video, to celebrate National Storytelling Week 2012.

'Like a donut, this book is somehow sweet and disgusting at the same time. Oh, and it's very funny too!' - Andy Stanton, author of the Mr. Gum books

'..it's quite a test to write a book about a boy with a donut addiction and be both sensitive and funny.. This is a fine and funny pre-teens book with some lovely zany illustrations by David Tazzyman.' - The Telegraph

'Love Diary of a Wimpy Kid but prefer stories with the familiar setting of the UK? Then this is the book for you... a hilarious diary which will have the reader chuckling as events unfold - and empathising with Dermot as he shares anguishes common to many near-teenage boys.' - Parents In Touch 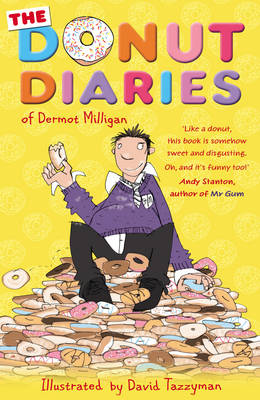 Dermot Milligan is eleven, obese and about to start at Big School. He's a big fan of The Lord of the Rings, and he hates his evil sisters, Ruby and Ella (Rubella). His all-time favourite donut is the classic ring, but he's also very keen on jam.