Astrosaurs Series - No. 14. Captain Teggs is no ordinary dinosaur - he's an astrosaur! On the incredible spaceship DSS Sauropod, along with his faithful crew, Gypsy, Arx and Iggy, Teggs rights wrongs, fights evil and eats a lot of grass! Teggs and the crew are sent on a special mission - to the Carnivore Sector.

King Jerk, one of the nicer, peaceful Carnivore rulers, has contracted deadly space mumps. The DSS don't want Jerk to die; his successor is violent and fearsome, so they've sent the only dinosaur in space - a herbivore, Dr Herrodon - who can cure him, along with the crew of the Sauropod, to help. But when they arrive at King Jerk's palace, things are not what they seemed at first. Strange attacks keep happening at night, and Dr Herrodon keeps going missing. Can Teggs get to the bottom of it all and help cure King Jerk? 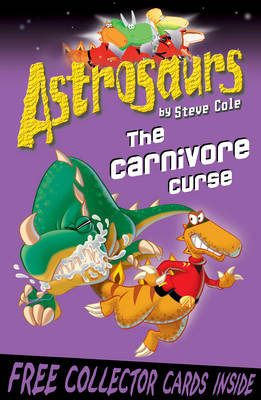