Marcus, Tallulah and Gracie are back in this final fast-paced, fun and frightening story in award-winning Pete Johnson's vampire series, following on from The Vampire Blog and The Vampire Hunters.

The Vampire Fighters is the third installment in award-winning Pete Johnson's vampire series, and it is the funniest yet. These books are absolutely perfect for young readers who love spooky stories, but aren't quite ready to dive into the world of full-blown horror or paranormal romance just yet. Marcus is thirteen and dealing with all the problems a typical thirteen-year-old has (the embarrassment of parents, the mysteries of girls), and his self-deprecating, sarcastic take on all those things is hilarious enough. Then add to the mix the fact that he's secretly a half-vampire, and it all gets a lot more complicated.

In this story, a seriously creepy Winter Fair has arrived in town, and a number of terrifying attacks have started happening. Somehow, Marcus gets roped into tracking down the culprit. All he wants is an easy life, but it looks like it's up to him to save the day . . . again!

Life has never been more complicated for thirteen-year-old Marcus. It's not easy trying to hide your secret identity as a half-vampire, avoid garlic at all costs, and work up the courage to ask a girl out. Especially when that girl is vampire-crazy Tallulah; plus, Marcus' parents are still convinced his special power is going to arrive any day now. And they're trying not to show their disappointment every time another day passes and it doesn't appear - but Marcus is totally feeling the pressure. As if that wasn't bad enough, a seriously creepy Winter Fair has arrived in town - and a number of terrifying attacks have started happening. Giles believes a super-evil sect of Deadly Vampires is behind them, and Marcus suspects an eerie ventriloquist at the Fair. All Marcus wants is an easy life. But now it's up to him to save the day... 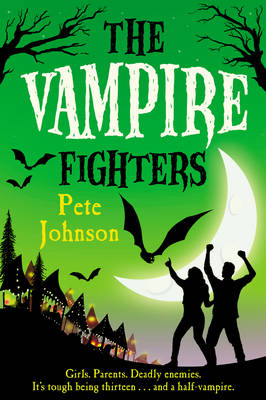