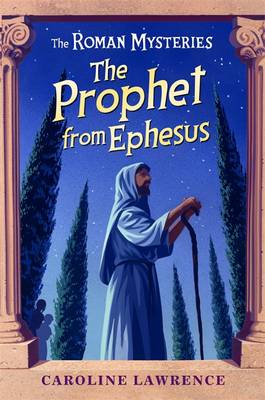 The Prophet from Ephesus

Flavia and her friends are hotly pursued by the emperor's soldiers as they investigate a kidnapping in the sixteenth Roman Mysteries adventure. The penultimate title in the bestselling Roman Mysteries series is re-issued with a brand new cover look.

The Prophet from Ephesus Synopsis

August, AD 81. Presumed dead by their families and wanted by unknown authorities, Flavia and her friends feel very far from home. When they discover that one of Miriam's twins has been kidnapped, the four detectives set out for Halicarnassus. Here they find prophets who heal the sick and cure the lame - or are they merely tricksters and villains in disguise? A talented storyteller, Caroline Lawrence has created a delightfully readable and accessible series that children will want to read time and time again.

Caroline Lawrence was our Guest Editor in September 2102 - Click here to see her selections.

Caroline Lawrence was born in London. Her American parents returned to the United States shortly afterwards and she grew up in Bakersfield, California with her younger brother and sister. Her father taught English and drama in a local high school and her mother was an artist.

When she was twelve, Caroline's family moved to Stanford University in northern California so that her father could study Linguistics. Caroline inherited her father's love of words and her mother's love of art. She subsequently studied Classics at Berkeley, where she won a Marshall Scholarship to Cambridge. There, at Newnham College, she studied Classical Art and Archaeology.

The books in the series are:
The Thieves of Ostia
The Secrets of Vesuvius
The Pirates of Pompeii
The Assassins of Rome
The Dolphins of Laurentum
The Twelve Tasks of Flavia Gemina
The Enemies of Jupiter
The Gladiators from Capua
The Colossus of Rhodes
The Fugitive from Corinth
The Sirens of Surrentum
The Charioteer of Delphi
The Slave Girl from Jerusalem
The Beggar of Volubilis
The Scribes from Alexandria
The Prophet from Ephesus
And finally…
The Man from Pomegranate Street

THE ROMAN MYSTERIES have sold over 1.1 million copies since its introduction in 2001 and in 2009 won the Classical Association Prize for 'a significant contribution to the public understanding of Classics' THE ROMAN MYSTERIES has been recognised as having an exemplary combination of entertainment and education.

More About Caroline Lawrence
Add To Wishlist
Buy from our bookstore and 25% of the cover price will be given to a school of your choice to buy more books.

Resist: One Girl's Fight Back Against the Nazis

Escape to the River Sea