Percy Jackson and the Sea of Monsters

LoveReading View on Percy Jackson and the Sea of Monsters

Percy Jackson and the Sea of Monsters is the second awesome adventure in Rick Riordan's bestselling series. This new paperback edition will tie-in with the star-studded and eagerly awaited new Percy Jackson film from Twentieth Century Fox.

Click here to see other titles in this superb adventure series which has sold over 1 million copies!...and visit www.rickriordan.com for more information on the exciting world of Percy Jackson.

Percy Jackson and the Sea of Monsters Synopsis

Half Boy. Half God. ALL Hero.

You can't tell by looking at me that my dad is Poseidon, God of the Sea. It's not easy being a half-blood these days. Even a simple game of dodgeball becomes a death match against an ugly gang of cannibal giants - and that was only the beginning. Now Camp Half-Blood is under attack, and unless I can get my hands on the Golden Fleece, the whole camp will be invaded by monsters. Big ones...Rick Riordan is the mythmaster. The Greek Gods are alive and kicking.

Percy Jackson and the Sea of Monsters Press Reviews

Puns, jokes and subtle wit, alongside a gripping storyline Telegraph

Riordan takes the reader back to the stories we love; then shakes the cobwebs out of them Eoin Colfer

Witty and inspired. Gripping, touching and deliciously satirical The Times

Perfectly paced, with electrifying moments chasing each other like heartbeats New York Times

Funny ...very exciting ...but it's the storytelling that will get readers hooked. After all, this is the stuff of legends Guardian 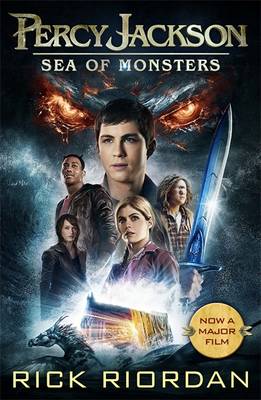