LoveReading View on One Boy's War

This powerful picture book captures both the optimism and the despair of the first months of the First World War. Only fifteen when the war is declared Sydney, like many other boys, longs to be old enough to have a crack at the bullying Kaiser. He watches as his father sets off for war with a spring in his step and his eyes shining. And he also sees just how wretched it makes his mother. Nonetheless, lying about his age, he signs up and arrives in France. Sydney gives his impressions of the war in two contrasting accounts. To his mother he writes reassuringly; for himself he records the absolute horror of it all and the different kinds of terrible deaths that befall his friends.

Sixteen-year-old Sydney is overwhelmed by the excitement of the 1914 recruitment campaigns and the bravado of men leaving for the Great War. Bursting with enthusiasm, he runs away to join up, but soon finds himself a long way from home in a frontline trench where reality - and the rats - begin to bite. Told through Sydney's optimistic letters home and his journal, this is his honest portrayal of the disillusionment and degradation of life and death in the trenches of World War I.

I thoroughly enjoyed this realistic and amazing picture book which reproduces letters on some pages and has soft, glossy paper. It brings the war to life and tells the story of a real boy and many others like him who went to war in 1914. Sofia Hurtado (age 11) Ibby Link

Find room for this indictment of the First World War - Bookseller

A moving depiction of the impact of war. - The Daily Telegraph

A great medium through which to develop children's empathy and understanding of an important historical event and a fantastic book with which to engage reluctant boy readers and writers. An emotionally-charged and provocative book, providing so much scope for discussion, debate, reflection and activity.- Junior Education
Plus 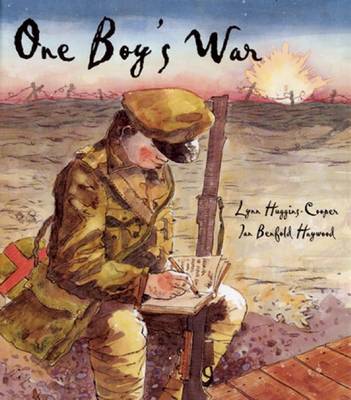 Lynne Huggins-Cooper has published over 100 books for children including picture books, educational and non-fiction titles, craft and parenting books. She also writes regularly for the TES and Prima magazine. This is her first picture-book for Frances Lincoln. Lynne lives in Newcastle upon Tyne. . IAN BENFOLD HAYWooD studied Fine Art at the Nottingham School of Art and Design and Illustration at the North Wales School of Art & Design. He has painted in Spain, worked as a community artist and been an art teacher, been marketing manager for a Japanese company and established his own business supplying components to the major audio-logical ...