We should never have given Paddington a boomerang for his birthday, said Mrs Brown as she gazed down at the figure lying on the lawn. I knew no good would come of it. Paddington let out a groan ... When the Browns find Paddington lying on the lawn, unable to remember where he is or even what the word bun means, they immediately realise something is seriously wrong and send for an ambulance. It's Paddington's first time in hospital and the doctors and nurses soon discover that he is rather an unusual patient! Full of the humorous misunderstandings and adventures that this lovable bear is famous for, this is a great story for the young Paddington fan who is apprehensive, or merely curious, about what goes on inside a hospital.

Praise for the Paddington series: 'I've always had great respect for Paddington...He is a British institution.' Stephen Fry 'Paddington has joined Pooh as one of the great bears of English children's literature.' The Teacher 'Michael Bond's accident-prone bear...has become one of the most enduring of children's characters.' The Bookseller

Michael Bond was born in Newbury, Berkshire on 13 January 1926 and educated at Presentation College, Reading. He served in the Royal Air Force and the British Army before working as a cameraman for BBC TV for 19 years. In 2015, Michael was awarded a CBE for his services to children's literature, to add to the OBE he received in 1997. Michael died in 2017, leaving behind one of the great literary legacies of our time. 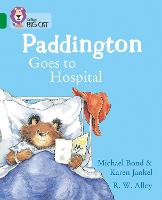