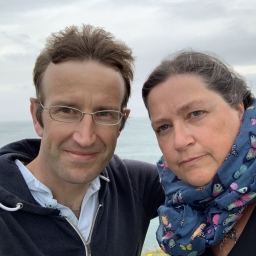 Jackie Morris grew up in the Vale of Evesham, dreaming of becoming an artist and living by the sea. She studied at Hereford College of Arts and at Bath Academy, and went on to illustrate for the New Statesman, Independent and Guardian among many other publications. As a children’s author and artist, she has created over forty books, including beloved classics such as Song of the Golden Hare, Tell Me A Dragon, East of the Sun, West of the Moon and The Wild Swans. She collaborated with Ted Hughes, and her books have sold more than a million copies worldwide. Jackie now lives in a cottage on the cliffs of Pembrokeshire, which she shares with a small pride of cats and various other gentle creatures.

Robert Macfarlane is the author of Underland, Mountains of the Mind, The Wild Places, The Old Ways and Landmarks. Underland won the Wainwright Prize and the Stanford Dolman Travel Book of the Year Award, whilst Mountains of the Mind won the Guardian First Book Award and the Somerset Maugham Award and The Wild Places won the Boardman-Tasker Award. Two of his books have been adapted for television by the BBC. He is a Fellow of Emmanuel College, Cambridge, and writes on environmentalism, literature and travel for publications including the Guardian, the Sunday Times and The New York Times.

The duo that produced the cultural phenomenon that took the publishing world by storm in 2017, winning awards and sparking dozens of fundraising campaigns to get The Lost Words into every primary school, have now produced a book very different in form, but absolutely kindred in spirit and every bit as essential a purchase. This is a pocket-sized treasure containing twenty-one new ‘spells’- poems inspired by the natural world around us. These animals, birds, trees and flowers may be relatively common but are often underappreciated and ignored. Whereas The Lost Words had a formal triptych structure to its spells, this collection is freer and ranges from celebratory to elegiac and sorrowful. As the introduction says “Loss is the tune of our age, hard to miss and hard to bear.... But there has always been singing in dark times—and wonder is needed now more than ever.”  Acrostic poems with the letters picked out in gold, feature most in this collection, as does the poet’s amazing facility with kennings and descriptive word play shown to great comic effect in Woodpecker  “Chisel-gouger, head-banger, bark-stripper, nerve-shredder”  Structured as a dialogue with badger one can see how much this lends itself to reading  and performing aloud as indeed is the author’s intention with all the collection. The lyrical consonant tones or staccato beats of these beautiful spells is absolutely matched by the harmonious fluidity of the watercolour images that grace each page. From the challenging gaze of the red fox to the eyelike whorls of silver birch bark to the balletic wings of the swift wrapping around the words, the images fix the words indelibly into your mind. Lockdown saw a widespread recognition of the necessity for contact with the natural world to maintain health and well-being. This book is the perfect walking companion with a glossary identifying each species depicted, allowing this small but powerful book to do double-duty as an artful field guide. As Macfarlane writes In Goldfinch, apparently composed while sitting at his grandmother’s deathbed, "God knows the world needs all the good it can get right now“.

Other books by Robert MacFarlane and Jackie Morris