Part of the Rugby Academy Series

Interest Age 8-12  Reading Age 8+ Good rugby stories for young readers are thin on the ground, but Tom Palmer’s Rugby Academy books are real winners! In this second book in the series, Rory and the other members of the Borderlands team are in France to play in the European Championship Tournament.  Tensions are running high though and not just on the playing field: many of the boys have dads in the RAF and they are alarmed as reports come in of skirmishes in the air, while central character Rory finds it difficult to get on with team captain, Jesse. The fourteen short chapters have all the impact of a Brian O’Driscoll attack, and it’s a great story, whether you are a rugby fan or not. ~ Andrea Reece

Particularly suitable for struggling, reluctant and dyslexic readers of 8+

The second instalment of Tom Palmer's rugby trilogy set against the backdrop of war.

The Borderlands boarding school rugby team have made it into the European Rugby Championship Tournament. They're enjoying their time in France, but Rory and the rest of the team can't help thinking about each of their parents, serving overseas in the growing conflict in the Central Asian Republic. Can the boys focus on the game enough to win the final and make it to the International Tournament? 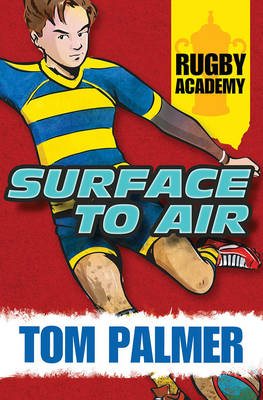