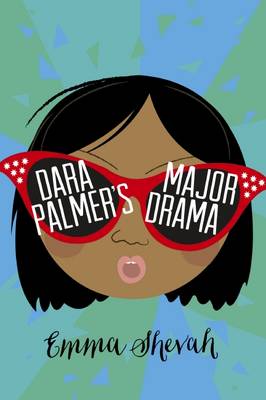 August 2015 Book of the Month  Dara is outraged when she doesn’t get the role of Maria in the school’s production of The Sound of Music. She and her best friend spend hours in front of the mirror practising their ‘faces’ and are convinced they’re talented actors. Could it be that Dara, who was adopted from Cambodia as a baby, just doesn’t look right for the part? Dara has a huge personality, but isn’t so good at seeing the other person’s point of view. When her friend, also Cambodian, decides to visit Cambodia it starts Dara thinking about who she is, and when she reluctantly joins Miss Snelling’s drama class that starts her thinking about other people too, including her own family. Dara is an unforgettable character and this is a hugely entertaining read that also considers identity, understanding and achieving your dreams.~ Andrea Reece

A Piece of Passion from Barry Cunningham, Publisher Being different is sometimes hard – especially if you believe that you have an astonishing Hollywood-bound talent! But if Dara is hilariously wrong about some things, she’s right about the stuff that matters, even if it takes her a while to discover that being adopted, coming from a faraway country and being misunderstood are all part of learning to APPRECIATE how much she’s truly loved and special – although not always for acting (up)! Emma Shevah is a wonderful, warm storyteller who makes me LAUGH out loud, and CRY (a bit).

Meet eleven-year-old Dara Palmer. She loves dancing and dreams of being a world-famous actress - which means she has to get the main part in the school play. When she doesn't get any part at all, Dara begins to wonder whether it's because of her looks rather than her acting skills. But Dara has big ideas - and is determined not to let prejudice stop her from being in the spotlight.

Exploring themes of adoption, determination and standing up to prejudice, Emma Shevah has written another moving and often hilarious look at a young girl dealing with being different to her friends, and finding a way to rise through it.

Praise for Dream on, Amber:

‘A great story about how a girl copes with a complicated life … I couldn’t put this book down and finished it in a weekend. I loved it and I think others will too!’ Poppy Stephens (age 9), LoveReading4Kids

‘I read this book in two days, including during a power cut, because it was so fabulous. (My mum told me to stop reading during the power cut but I couldn’t!)’ Isobel Jeffries (age 8), LoveReading4Kids

‘Dream On, Amber is fast and funny with wonderful little illustrations and an eye-catching design. Amber is a
fabulous character; tiny but tough with a big heart.’ Booktrust

Emma Shevah grew up in London but has lived and travelled in lots of countries. She studied English and Philosophy at Nottingham University and has an MA with Distinction in Creative and Professional Writing from Brunel.

Emma is half Irish and half Thai. Her great-great grandfather was King Rama I of Thailand, so by all rights she should be living a life of ease and luxury in the tropics. Instead, she spends her days dashing around rainy North London writing, teaching English and raising four children.

Emma  likes nothing better than getting on a plane and going on an adventure and is currently cooking up a cunning idea for a book that will involve travelling to new and exciting places as frequently as possible.

More About Emma Shevah
Add To Wishlist
Buy from our bookstore and 25% of the cover price will be given to a school of your choice to buy more books.