Diggers The Second Book of the Nomes

LoveReading View on Diggers The Second Book of the Nomes

Terry Pratchett does it again, the second book in the ‘Bromeliad Trilogy’ or ‘Book of the Nomes’ is another confection of delight, wit and fantastical storytelling. Terry Pratchett really needs no introduction, each of his books have been little or large masterpieces in their own right. In ‘Diggers’ the Nomes split up and this book concentrates on the Nomes that stay at home, Grimma and Dorcas attempt to keep marauding humans at bay, while they try to make the rest of the Nomes see sense. As with the first book, the beginning of each chapter heralds quotations from the Nomes Book of Nome, these are little creations of joy and in a few words explain what is to come in the following chapter, in pure Nomish style. ‘Diggers’ sees Nomes with attitude, Nomes with bite, so tuck yourself in and enter a world occupied by four inch high Nomes in full on survival mode - it’s an absolute cracker of a read. ~ Liz Robinson

Diggers The Second Book of the Nomes Synopsis

This is the story of Jekub, the Dragon in the Hill with great big teeth and a great loud voice. (Well, that's according to the nomes, but they are only four inches tall.) When humans threaten their new home in the quarry, the natural thing would be to run and hide. But the nomes have got the wild idea that they should fight back. After all, everyone knows that nomes are faster and smarter than humans, and now they have a secret weapon...This is the fantastically funny second book of the nomes, from the author of the bestselling Discworld series.

Diggers The Second Book of the Nomes Press Reviews

'A well-written comic fantasy that blends an off-beat but believable plot with strong but quirky characters, lots of entertaining adventures and a liberal dose of humour ... Highly recommended' The School Librarian 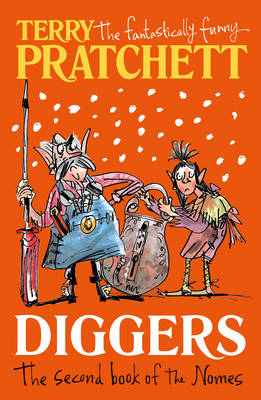