They Didn't Teach This in Worm School!

LoveReading View on They Didn't Teach This in Worm School!

August 2016 Debut of the Month   This story of an unusual friendship is exactly the sort of barmy, surreal comedy adventure that reduces young readers to hysterical giggling. Marcus, a worm, strikes up an alliance with Laurence, a nondescript bird, initially to avoid being eaten. He attempts to guide Laurence to Lake Nakuru in Kenya, and while their trip ends in failure, a real friendship is formed along the way. Highlights of their adventure include encounters with a beatbox dancing squirrel, some snooty flamingos, and lots of mashed potato. No matter how silly it gets (very), there’s a logic underneath and real feelings at the heart. Simone Lia’s illustrations feature throughout and add immensely to the fun.

This is one to recommend to fans of the Timmy Failure and Barry Loser books. ~ Andrea Reece

They Didn't Teach This in Worm School! Synopsis

Marcus is a worm. Laurence is a bird that looks like a chicken. Laurence wants to gobble up Marcus for breakfast, but the worm surprises him with Good morning! The worm tries to keep the conversation going, and it goes in a very unexpected direction: Laurence seems to think he's a flamingo (he's definitely NOT), and Marcus soon finds himself riding Laurence as he flies towards Africa, where Laurence believes he can finally be happy. A tale of high adventure, wily tricks and unlikely friendship, beloved comic artist Simone Lia has created a comedy classic that will have readers wriggling with laughter.

They Didn't Teach This in Worm School! Reader Reviews 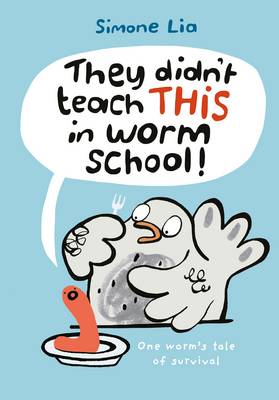 Award-winning comic artist Simone Lia began painting and drawing in her dad's tool shed at the age of 13 before going on to study at the University of Brighton and then the Royal College of Art. She has written comic strips for children and adults for numerous publications including The Observer with Things That I've Learnt , The Chip and Bean Quiz in The Independent on Sunday and Sausage and Carrots in The DFC. She has also published graphic novels Fluffy and Please God, Find Me a Husband. Her work has been exhibited across Europe, including the Tate Britain. Simone lives and ...

View All Books By Simone Lia