Storm, shipwreck, survival. Chris Vick's novel delves deep into the might and majesty of the unpredictable ocean, the strength of an unlikely friendship between a British boy and a Berber girl and their will to survive against all the odds.

A British boy narrowly survives the sinking of his yacht in a huge storm off the coast of Morocco. After days alone at sea in a tiny rowing boat Bill rescues a girl clinging for her life to a barrel. Aya, from the nomadic Berber tribe, was escaping to Europe when her migrant ship was destroyed in the same storm. Through endless days and star-spangled nights, they drift - mere specks on the vast, empty ocean - weakened by fear, hunger, and burned by the unforgiving sun.

Aya tells Bill about The Arabian Nights, and Shahrazad, who told 1001 stories to save her life. As hope of rescue begins to fade, they find strength in these tales of magic, brave heroes, wily thieves, greedy sultans, and courageous girls. When they land on a desert island, they're surprised to be confronted by a stranger who is not what he seems... and back out on the waves once more in the dark deep, a shadow follows...

'A powerful, starkly told novel, which holds its tension to the end, and although simple in its essence, is as profound as the depths of the sea' Minerva Reads.

'A storm, a shipwreck and a story of survival in a contemporary, timely adventure tinged with legend and fable' Fiona Noble, The Bookseller.

'A thrilling and a magical book. I take my hat off to Chris. It is an absolute gem' Sally Gardner.

'Vick writes vividly about the privations and terrors of their precarious existence and his attention to practical detail brings their hardships into stark relief' 5* review, Books for Keeps.

'Perfect for your 14-year-old, taking them on a sea voyage that transports them to a world of near death and the discovery of an unlikely friendship' Jasbinder Bilan, Guardian. 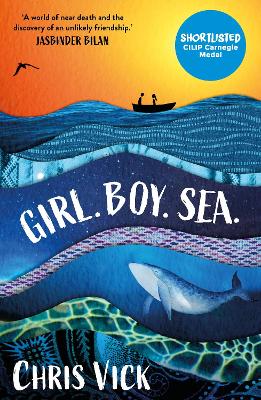 Chris Vick is a graduate of the Bath Spa MA in Writing for Young People. In between writing and teaching, Chris works for a whale and dolphin conservation charity and is a proud member of Authors4Oceans. He lives near Bath with his wife and daughter. Girl. Boy. Sea. was shortlisted for the 2020 CILIP Carnegie Medal. 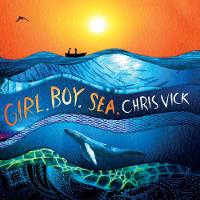 View All Books By Chris Vick