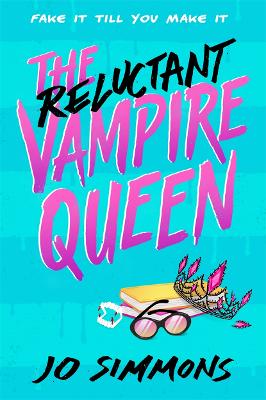 Mo is a young woman with a plan: top grades, university, internship with the UN then a job in politics or human rights. Even her best friend and fellow Mini Battenburg gourmand Lou thinks she works too hard, and her very existence irritates school bully Tracey Caldwell, so when she’s accosted by a vampire with the news that she is ‘the Chosen One’ and destined to become the Vampire Queen of Great Britain, Mo isn’t as pleased as some others might be.

It doesn’t fit with The Plan, and she really doesn’t fancy the vampire diet. There are some pros though, mostly gorgeous young (human) Luca, who will become her familiar if she takes the role. Can smart Mo find a way of having it all, the vampire lifestyle and the career she dreams of? She’s ready to give it her best shot.

The set up allows for lots of opportunities for comedy, and no shortage of thrills either as Mo prepares for the arrival of the Vampire King, but there’s humour too in the relationship between Mo and Lou. Simmons successfully mixes Gothic horror into the familiar, loving knockabout of teenage life and friendships and to great effect.

Fifteen-year-old Mo Merrydrew isn't exactly expecting to be asked to be Vampire Queen of Great Britain when she's cycling home from school one wet Tuesday evening. Apparently, she is 'the Chosen One'. Aside from being uncomfortable with the idea of unelected power (not very democratic), there's the blood drinking to consider (Mo is a vegetarian), and frankly it's just not really the sort of role Mo's looking for (she wants to aim for a real job in politics). But - if you're Vampire Queen, you probably don't have to do PE any more, and when the dreamy Luca, a vampire familiar, turns up, it all suddenly starts to look a bit more appealing ...

Jo Simmons began her working life as a journalist. Her first fiction series for children, Pip Street, was inspired by her own kids’ love of funny fiction, and two Super Loud Sam books followed. My Parents Cancelled My Birthday is Jo's third book for Bloomsbury. In addition to children’s fiction, she has also cowritten a humorous parenting book, Can I Give Them Back Now?: The Aargh To Zzzz of Parenting, published by Square Peg.

Jo lives in Brighton with her husband, two boys and a scruffy formerly Romanian street dog.

More About Jo Simmons
Add To Wishlist
Buy from our bookstore and 25% of the cover price will be given to a school of your choice to buy more books.

The Children of Castle Rock