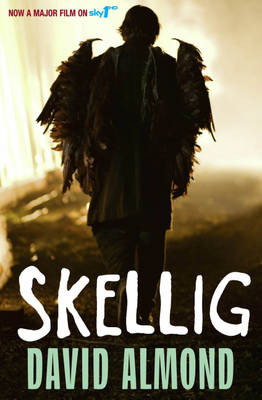 This is a wonderfully eerie and magical story about believing in something extra special and why it may make a difference.  It’s full of happiness and sadness but ultimately it’s incredibly fulfilling.

'Touched with a visionary intensity, this strange life-affirming tale exercises every muscle of the imagination' the Guardian

Winner of the Carnegie Medal, the Whitbread Children's Book of the Year as well as a string of international prizes.

Michael stumbles into the old garage of his new home, and finds a strange creature - part owl, part angel, a being who needs Michael's help if he is to survive. Michael nourishes Skellig back to health, while his baby sister languishes in the hospital. But as Skellig helps Michael breathe life into his sister, Michael's world changes for ever.

" . . . gripping, beautiful and brilliantly written . . . Everyone is raving about this unforgettable book." - THE SUNDAY TIMES

"Truly original, mysterious and affecting . . . Almond treads with delicate certainty, and the result is something genuine and true." - Philip Pullman, THE GUARDIAN

David Almond was our Guest Editor in September 2011 CLICK HERE to see his choices.

David Almond is the acclaimed author of many award-winning novels for children such as Skellig, Kit's Wilderness and My Name Is Mina, and has collaborated with artists Polly Dunbar, Dave McKean and Oliver Jeffers on fiction for younger readers. David's books sell all over the world, and in 2011 he was the recipient of the prestigious Hans Christian Andersen Award. He lives in Hexham, Northumberland.

Click here to read more information about the author.

One of the best-loved and finest writers of today, David Almond made an immediate impact with Skellig, his first book. The moving story of a boy’s discovery of a strange creature in the shed which can be interpreted in many ways introduced some to the recurrent themes of David Almond’s writing. Infused with a touch of magic or the supernatural or ‘belief’, David Almond writes sensitively about the inner complexities of growing up. Much influenced by the landscape of Tyneside where he was brought up and still lives, David Almond’s books have a strong sense of place especially in titles such as Heaven’s Eyes, The Fire-Eater and Kit’s Wilderness. Although often clearly set in some particular time, there is a timeless quality to David Almond’s stories which give them enduring appeal.

More About David Almond
Add To Wishlist
Buy from our bookstore and 25% of the cover price will be given to a school of your choice to buy more books.