Astrosaurs Series - No. 18. This series goes from strength to strength.  This is the 18th title and it comes complete with free collector cards for kids to play with and to swap with friends.  Captain Teggs is no ordinary dinosaur - he's an astrosaur! On the incredible spaceship DSS Sauropod, along with his faithful crew, Gypsy, Arx and Iggy, Teggs rights wrongs, fights evil and eats a lot of grass. The reappearance of a dino spaceship lost for 300 years and full of savage sabre-tooths spells danger for Teggs and his crew.

Join the Astrosaurs as they fight evil across the galaxy.  The reappearance of a dino spaceship lost hundreds of years before spells danger for Teggs and the crew. 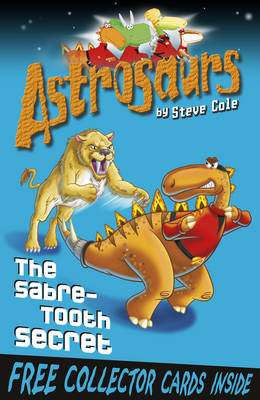