Astrosaurs Series - No. 20. The Dinosaurs with a difference are back for a super space adventure in this extra long, bumper story and the 20th Astrosaurs title. Captain Teggs Stegosaur must lead his team against his arch enemy General Loki who has just stolen a time machine. Following Loki leads the astrosaurs down to Earth and back to a time before they left. Having uncovered a deadly plot to destroy history the astrosaurs will need all their powers to stop it before it is too late.

Steve Cole counts down his favourite Astrosaurs in this video:

'Who can resist the mix of dinosaurs and space?' - Sunday Times

'A great book . . . the idea of dinosaurs flying spaceships is brilliant. (4 stars out of
5)' - Learning Support Magazine

'Steve Cole has captured the attention of dinosaur-loving children with this super
series of books . . . exciting and funny, this series is bound to be a hit with budding
young readers.' - South Wales Argus

'With black and white illustrations to break up the text, this funny, fast moving story
should attract young readers, especially boys, and keep them turning the pages.
Then, if they're really hooked, they've got the rest of the series to read too.' -
wordpool.co.uk 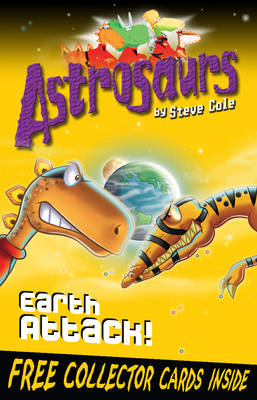