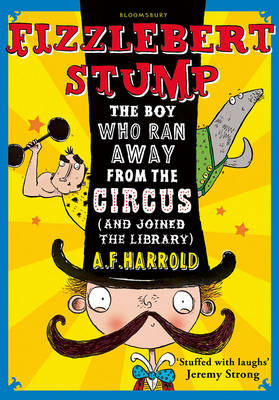 July 2012 Debut of the Month.  A hero with a difference! Fizzlebert Stump wants to make changes to his life. Bored with life in the circus, he is determined to run away and join…the Library! How Fizzlebert sets out to achieve his goal and gets kidnapped by some unlikely villains for his audacity is a riotous romp which will be loved by all fans of Mr Gum!

In addition to our Lovereading expert opinion for Fizzlebert Stump the Boy who ran away from the Circus (and joined the Library) a small number of children were lucky enough to be invited to review this title. Scroll down to read their reviews...

'There are many boys in the world, all slightly different from one another, and most of them are referred to by names. These are often John or Jack or Desmond, but sometimes they are James or Philip or Simon. Once, and once only, there was a boy whose name was Fizzlebert.' Fizzlebert Stump lives in a travelling circus. But although he gets to hang around with acrobats, play the fool with clowns, and put his head in a lion's mouth every night, he's the only kid there - and he's bored. But then Fizz decides to join a library, and life suddenly gets a lot more exciting, when a simple library card application leads to him being kidnapped by a pair of crazed pensioners! Will he ever see the circus again?

Alexander Butler, age 8  I thought the book was awesome and full of laughs. Click here to read the full review

Sam Harper, age 9    The writing style, with little extra comments from the author, is witty and comical and often made me laugh out loud. Click here to read the full review

Lucy Minton, age 9    I enjoyed this book because it has so many unexpected twists that you never quite know what is going to happen next.  Click here to read the full review

Adam Graham, age 9   It is one of my favourite books that I have ever read and I have read a lot of books! Click here to read the full review

Nathan Gray age 8  If you like a good laugh then this is the book for you. Click here to read the full review

Ewan Young, age 9   I think anyone who likes funny books or adventure books would really like this, it's better than Jeremy Strong!  Click here to read the full review

A Beginner's Guide to Ruling the Galaxy It's hard to crush your enemies when your homework's due...