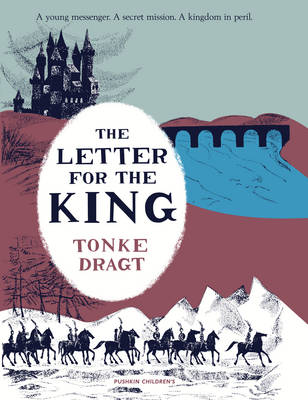 The Letter for the King

Gripping from its opening moment onwards, this award-winning book that doesn’t miss a beat from its thrilling beginning to its satisfying ending. Disturbed during the night of contemplation before he is made a knight, sixteen-year-old Turi is handed a letter which must be secretly delivered. Keeping his identity hidden and keeping the letter safe at all times, Turi travels through deadly danger in which survival depends on adhering to the chivalric codes of courage, friendship and honesty. A thrilling adventure which is full of heart.

A Piece of Passion from Adam Freudenheim, Publisher, Pushkin Press and Pushkin Children's Books    The Letter for the King by Tonke Dragt is the classic Dutch children's book.  Already translated into more than a dozen languages, made into a feature film and with over 1 million copies sold, The Letter for the King is one of the most gripping, page-turning novels I've ever read.  My 8-year-old son and 10-year-old daughter both loved it and couldn't put it down either. I started reading it aloud to them, and then one morning when my son woke early he creeped into my bedroom and 'stole' the bound proof in order to finish it - later he sheepishly explained that he just couldn't wait for me to finish reading it aloud, he had to know what happened next! For anyone who likes a heart–thumping tale of good vs. evil, of lone young hero desperate to save a kingdom, this is the book for them.  This beautiful edition, printed in Italy, includes a wonderful hand–drawn map of the kingdoms of Unuawen and Dagonaut on the endpapers, original illustrations by the author, and is a wonderful gift for any fan of classic fantasy in the Tolkien mould.

The Letter for the King Synopsis

A young messenger. A secret mission. A kingdom in peril. It is the dead of night. Sixteen-year-old Tiuri must spend hours locked in a chapel in silent contemplation if he is to be knighted the next day. But, as he waits by the light of a flickering candle, he hears a knock at the door and a voice desperately asking for help. A secret letter must be delivered to King Unauwen across the GreatMountains - a letter upon which the fate of the entire kingdom depends. Tiuri has a vital role to play, one that might cost him his knighthood. Tiuri's journey will take him through dark, menacing forests, across treacherous rivers, to sinister castles and strange cities. He will encounter evil enemies who would kill to get the letter, but also the best of friends in the most unexpected places. He must trust no one. He must keep his true identity secret. Above all, he must never reveal what is in the letter...

Translated from the dutch by Laura Watkinson.

The story has the quality of a legend, a tale of ancient times. Over a million copies of the book have been sold worldwide. The Letter for the King has everything. Nederlands Dagblad

There ought to be a warning written on it: Watch out: Whoever reads this book will forget everything that's happening around them! From the first sentence, the pages turn into a cinema screen, and no director could have created more beautiful or gripping images Die Zeit

It is fascinating, captivating in the same way as Tolkien's The Hobbit and The Lord of the Rings. As well as the familiar battle between good and evil, we are presented with a discovery of true chivalry. Schager Courant

Tonke Dragt was born in Jakarta in 1930 and spent most of her childhood in Indonesia. When she was twelve, she was interned in a camp run by the Japanese occupiers, where she wrote (with a friend) her very first book using begged and borrowed paper. Her family moved to the Netherlands after the war and, after studying at the Royal Academy of Art in The Hague, Dragt became an art teacher. She published her first book in 1961, followed a year later by The Letter for the King, which won the Children's Book of the Year award and has been translated into sixteen languages. Dragt was awarded the State Prize for Youth Literature in 1976 and was knighted in 2001.

More About Tonke Dragt
Add To Wishlist
Buy from our bookstore and 25% of the cover price will be given to a school of your choice to buy more books.

Julia and the Shark