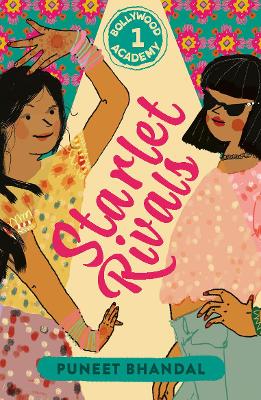 Bela is a talented dancer, taught by her mum from an early age. She’s so good in fact that she wins Dance Starz, the talent show that keeps every family in India glued to their TV screens on Friday nights. But that’s just the star of Bela’s adventures. Her prize is a place at the most prestigious stage school in the Eastern world, the Bollywood Academy.

What follows is everything readers could want – dream come true film opportunities, stays in the most glamorous locations, new friendships and the tiniest hint of romance. And then there’s Monica too, born into Bollywood royalty and determined that Bela is not going to get any of the spotlight she feels is hers by right. The rivalry between them, and Monica’s dirty tricks, gives an added thrill to the story. Young readers who love Ballet Shoes or The Swish of the Curtain, or who dream of stage stardom, or those who just love stories with great characters in exciting situations, they’ll all devour this new series. Applause all round!

Starlet Rivals follows the emotional highs and lows of Bela, an 'outsider' in Bollywood who must compete with the children of movie stars to gain attention in the industry.

12-year-old Bela has always dreamed about becoming a famous Bollywood star, and now the opportunity might finally be within her grasp. When a reality TV show gives her the chance to dance in front of the nation, she knows that she is performing for a place at the most prestigious stage school in Mumbai.

A page-turning, ‘rags to riches’ tale: Bela moves from a low socio-economic household in a suburb of Mumbai to the glamorous world of Kohinoor Island, home of famous actors and movie producers. The story never loses sight of Bela's innate good nature and empathy, with sensitive passages on her growing anxiety as she struggles to retain her belief in herself in the face of a fickle industry.

Puneet Bhandal is a former Bollywood film journalist and current owner of an Indian occasionwear boutique where her dresses are modelled by real-life stars including 'Miss England 2021'. Starlet Rivals is her debut novel. Check her out on Instagram @thebollywoodacademy

With interesting cultural details including glimpses into real-life locations in India including the Liberty Cinema in Mumbai and the Water Palace in Rajasthan.

Written by a debut #ownvoices author, a new and brilliant voice in children’s fiction.

The Boy Who Got Accidentally Famous