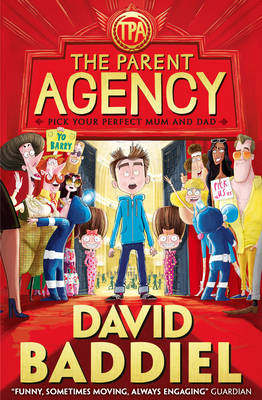 Winner of the Laugh-Out-Loud Book Awards 2016, 9-13 years Category.   A brilliantly funny story about a boy who makes a very rash wish! Barry is not the first boy in the world to say “I wish I had better parents” but in his case, the third time he says it, there are some quite startling results. Barry’s list of complaints against his parents is a long one. And it starts with his terrible name. He goes on to blame them for being so boring, being so mean to him about letting him play out and, above all, for never giving him an exciting birthday party! (or even a Lionel Messi duvet cover). But, when the posters on Barry’s walls come alive and his heroes Messi and James Bond give Barry the chance to choose his own parents, just what kind of parents would he choose? Parenting is far harder than Barry had ever imagined!

A brilliantly funny, gripping novel from a born storyteller, The Parent Agency is an epic wish-fulfilment adventure for every child - and for the child in everyone. Barry said, a third time, I wish I had better parents! And then suddenly the entire room started to shake...Barry Bennett hates being called Barry.

In fact it's number 2 on the list of things he blames his parents for, along with 1) 'being boring' and 3) 'always being tired'. But there is a world, not far from this one, where parents don't have children. That's far too random for something so big and important. In this world, children are allowed to choose their parents. For Barry Bennett, this world seems like a dream come true. Only things turn out to be not quite that simple...Illustrated by Roald Dahl Funny Prize winner, Jim Field.

'I love this book because it really made me laugh! The best book I've read since I was born!' Tom, 11, LoveReading4Kids

'Exciting and funny - I didn't want to put it down!' Daisy, 10, LoveReading4Kids

David Baddiel has written and performed in a series of highly successful TV comedy shows, including The Mary Whitehouse Experience and Baddiel and Skinner Unplanned. He is the author of three previous novels for adults, but The Parent Agency is his first book for children.

He lives in London.

More About David Baddiel
Add To Wishlist
Buy from our bookstore and 25% of the cover price will be given to a school of your choice to buy more books.