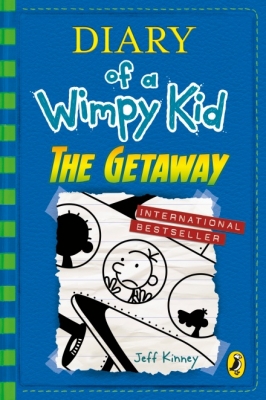 "Holiday as only a Wimpy Kid can "

February 2019 Book of the Month

The Heffleys head off on holiday in this latest Wimpy Kid adventure. It’s supposed to be a dream break but, as recounted by wimpy kid Greg in his usual doleful, deadpan way together with the action-filled comic-strip style illustrations, is pretty much a non-stop catalogue of disasters, from the moment the Heffleys pick up the wrong luggage on their (delayed) flight, to insect, bird and lizard attacks, a burst banana boat and nightmare cruise. It makes for very funny reading of course, and Kinney as ever absolutely nails family and teen life – I particularly enjoyed the subplot describing the miserable time had by big brother Roderick. Holiday reading doesn’t get any better than this.

Diary of a Wimpy Kid: The Getaway (book 12) Synopsis

Greg Heffley and his family are getting out of town. With the cold weather setting in and the stress of the Christmas holiday approaching, the Heffleys decide to escape to a tropical island resort for some much-needed rest and relaxation. A few days in paradise should do wonders for Greg and his frazzled family. But the Heffleys soon discover that paradise isn't everything it's cracked up to be. Sun-poisoning, stomach troubles and venomous creatures all threaten to ruin the family's vacation.Can their trip be saved, or will this island getaway end in disaster?

Whether a loyal fan already or new to the Wimpy Kid books, The Getaway is the perfect book for young readers this Christmas.

Jeff Kinney is a #1 New York Times bestselling author and a six-time Nickelodeon Kids’ Choice Award winner for Favorite Book for his Diary of a Wimpy Kid series. In 2018 Jeff Kinney was found to be the most popular author in schools in the UK in the annual What Kids are Reading Awards. Jeff has been named one of Time magazine’s 100 Most Influential People in the World. He is also the creator of poptropica.com, which was named one of Time’s 50 Best Websites. He spent his childhood in the Washington, D.C., area and moved to New England in 1995. Jeff lives with his wife and two sons in Plainville, Massachusetts, where they own a bookstore, An Unlikely Story. For more Wimpy Kid, visit wimpykid.com.

Kinney’s work has been widely praised for its ability to turn reluctant readers on to books. The Diary of a Wimpy Kid series has been a permanent fixture high up in the UK Nielsen Bookscan Charts as well as the USA Today, New York Times, Wall Street Journal and Publishers Weekly bestseller lists.

Diary of a Wimpy Kid books are published in 70 editions in 59 languages. More than 200 million copies of the books in the series have been sold globally. Published in 2007, the first book was an instant bestseller and has remained on the New York Times bestseller list since its publication and through the release of the thirteenth book for more than 655 weeks total.

The first-ever theatrical adaptation of Diary of a Wimpy Kid was staged by the prestigious Minneapolis Children’s Theatre Company from April to June 2016. It earned rave critical reviews and had sold out shows. Four movies based on the book series have grossed more than $265 million.

Wimpy Wonderland Island on poptropica.com, a virtual world for kids, remains one of the most visited pages on the popular website.

Fans can interact with the brand at www.wimpykidclub.co.uk on Facebook at WimpyKidBooksUK and on the YouTube.com/WimpyKid channel which has over 7 million views and over 58,000 subscribers.

I love this book.I started reading the diary of a wimpy kid book's when I was 6. I got the idea when my brother read the world book day (diary of Greg Heffley best friend Rowley Jefferson)book My favourite part is when Greg finds a big Spider in his slipper! I would definitely recommend it.

I love this book.I started reading the diary of a wimpy kid book's when I was 6. I got the idea when my brother read the world book day (diary of Greg Heffley best friend Rowley Jefferson)book My favourite part is when Greg finds a big Spider in his slipper!

This is an amazing book. 5 stars

This is an amazing book.