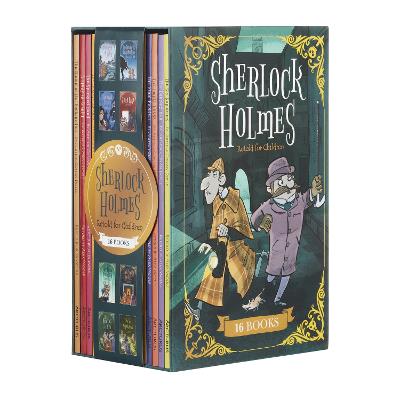 While Conan Doyle’s stories naturally lend themselves well to adaptation and reinvention, Alex Woolf’s spritely re-tellings of 16 classic Sherlock stories are perfectly-pitched for 7+-year-olds, with sparky dialogue and visual descriptions peppering the action, which has been broken into easy-to-digest chapters. In addition, Eve O’Brien’s atmospheric illustrations add further dashes of drama and character, from domestic scenes that depict Holmes and Watson at home, to scene-of-the-crime vignettes

Though ideal for young readers to get stuck into independently, with their charming sense of adventure and lots of lively exchanges between Holmes and Watson, all the books in this glorious giftset are also ideal for sharing and reading aloud.

Young readers can now discover the adventures of Sherlock Holmes and his loyal sidekick Dr. Watson. Join our heroes as they solve the mystery of priceless jewels that vanish without trace, investigate a monstrous hound spotted on the mysterious moors, and crack many other famous cases.

In this brilliant box set, award-winning children’s fiction author Alex Woolf retells sixteen tales of the world’s most famous detective. Woolf has breathed new life into Sir Arthur Conan Doyle’s classic mystery stories, such as A Study in Scarlet and The Hound of the Baskervilles, making them wonderfully accessible to children. Told with wit and panache, each story retains many of the original turns of phrase, whilst simplifying and clarifying language and key plot points.

Eve O’Brien’s illustrations punch up the action, deepen the intrigue, and bring to bear her own strong sense of humour. Perfect for readers aged 6+, this box set is a must-have for any young reader interested in solving mysteries, embarking on adventures, and saving the day!

Alex Woolf was born in Willesden Green, North-West London in 1964 and studied History and Politics at Essex University. He has travelled in America and Europe and worked variously as an accountant, a warehouse assistant, a print buyer, a door-to-door salesman and a dish washer in a roach-infested restaurant in Florida.

Since 1995, he has been editing books for young people, and in 2001, he began to write. He has penned more than 40 books on a surprisingly wide range of topics, including the fantastic new fiction title, Aldo Moon and the Ghost of Gravewood Hall.

- The Hound of the Baskervilles

- A Scandal in Bohemia

The Hound of the Baskervilles 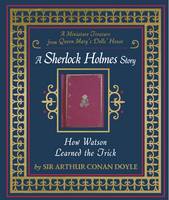 How Watson Learned the Trick

The Wide Window (A Series of Unfortunate Events 3)