Winner of the Guardian Children's Fiction Prize 2009. A dramatic, topical novel inspired by Shakespeare's Othello which will appeal to both boys and girls with its themes of football and celebrity culture.  Award winning Mal Peet’s Exposure is the third in the gripping trilogy which began with Keeper, about top sports journalist, Paul Faustino. Faustino always has an eye for the good story and when Otello, a national hero with money, an attractive wife and great media profile, makes a sensational club transfer, Faustino is already taking notice. Such high expose puts Otello at risk and when his name is linked to a scandal – all be it wrongly – the power of the press turns against him. As ever, Faustino is an unforgettable character and an excellent commentator on the way the press can both make and destroy reputations. The first in the trilogy was Keeper and the second was Penalty.

Revered as a national hero... married to the desirable Desmerelda... cherished by the media... soccer star, Otello, has it all. But a sensational club transfer sparks a media frenzy, and when he is wrongly implicated in a scandal, the footballer's life turns into a tragic spiral of destruction.

"Peet handles big themes with supreme confidence. He is a very good storyteller who can create a rich and ambitious novel. It includes much wisdom on the whole issue of celebrity".

A message from last year's winner, Patrick Ness, author of The Knife of Never Letting Go and its sequel The Ask and the Answer, was also a judge for this year's award and said:

"Exposure is a terrific book.  It's really exciting, meaty and ambitious and terrifically told and put together."

Mal Peet who beat authors including Terry Pratchett to win the £1,500 prize said:

"It feels absolutely great – I've always had my eye on the Guardian prize but it's always evaded me.  My books have never even made the shortlist before, and I'd always sit at home gnashing my teeth and tearing my hair."

About the The Guardian children's fiction prize:

It is the only award judged by children's authors. It was launched in 1967; previous winners include Ted Hughes, Jacqueline Wilson and Philip Pullman. 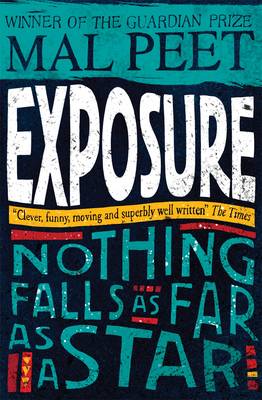