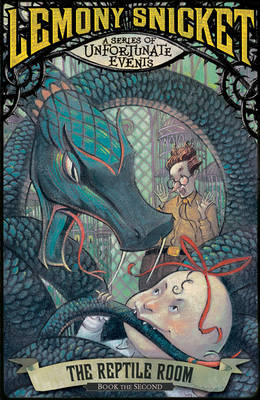 The Reptile Room (A Series of Unfortunate Events 2)

The second in this bestselling series (in fact in the top five of bestsellers of the last decade), now at long last available in paperback, sees the Baudelaire children taken to their new guardian, Dr Montgomery, having escaped the evil Count Olaf in the first story.

More venomous than a viper, and almost twice as unnerving.  Violet, Sunny and Klaus are three intelligent, charming and resourceful children but their newfound life is endangered when Count Olaf's final threat comes back to haunt them. Here they encounter deadly snakes, bizarre assistants. tattoos and disguises, strange behaviour and much much more, all of which is revealed in the hugely entertaining, totally deadpan humour that has made this series so original and so captivating.

Throughout 2010 further titles will be released in the long-awaited paperback format.  Rest assured we'll be the first to know when they're coming. To go to our special 'Series of Unfortunate Events' click here.

The Reptile Room (A Series of Unfortunate Events 2) Synopsis

There is nothing to be found in the pages of these books but misery and despair. You still have time to choose something else to read. But if you must know what unpleasantries befall the charming and clever Baudelaire children read on... The siblings endure a car accident, a terrible smell, a deadly serpent, a long knife, a brass reading lamp, and the re-appearance of a person they hoped to never see again. Then again, why trouble yourself with the unfortunate resolutions? Avoid these books in Lemony Snicket's international bestselling series and you'll never have to know what happens!

Diary of a Wimpy Kid: The Meltdown (Book 13)