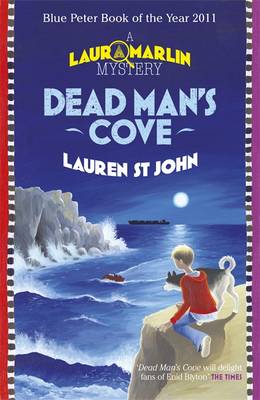 Overall winner of the Blue Peter Book Award 2011 and winner of the Favourite Story Category. - A Lovereading4kids 'Great Read' you may have missed 2011 selection - Shortlisted for the Galaxy Children's Book of the Year Award 2011.

From the author of the much-loved White Giraffe series comes an exciting four-part adventure series featuring Laura Marlin, an 11 year old ace detective.  As with Lauren’s earlier animal series, this is brilliantly written with its terrific prose and atmospheric descriptions of the Cornish coast and is a real page-turner too.  Laura longs to be adopted and eventually her wish seems to come true and she moves to Cornwall – to Dead Man’s Cove - to live with her uncle.  Her new life however, seems to be full of secrets and as the mysteries pile up she finds she must put her keen detective mind to full use.  Accompanied by Skye, a three-legged husky she sets out on an adventure to uncover the mysteries – including a message in a bottle - of Dead Man’s Cove.

*Here is a list of all the Blue Peter Book Award 2011 shortlisted books:

Do Igloos Have Loos? - Mitchell Symons

How the World Works - Christiane Dorion

What You Need To Know Now: The World in Facts, Stats, and Graphics - Joe Fullman, Ian Graham, Sally Regan and Isabel Thomas

Most Fun Story with Pictures:

When orphaned Laura Marlin moves from a children's home to live with her uncle in Cornwall, she longs for a life of excitement just like the characters in her favourite detective novels. A real life adventure is on hand as she is deposited at her uncle's spooky house ...Why does her uncle, Calvin Redfern, forbid her to go to Dead Man's Cove? What's the truth about Tariq, the silent Indian boy who lives with the flamboyant Mukthars? Who is J? Who has left the message in a bottle for Laura to discover? Mysteries abound and who better to solve them than Laura Marlin, ace detective? Accompanied by her trusty companion, Skye, a three-legged husky, the dog she's always wanted, Laura's adventures begin.

'I strongly believe that this is a book everyone will love. It is full of adventure and mystery. It's one of those books that you really don't want to put down and you really have to force yourself to stop reading' - The Guardian Online


'A charming novel' - Teenage Fiction For All Ages