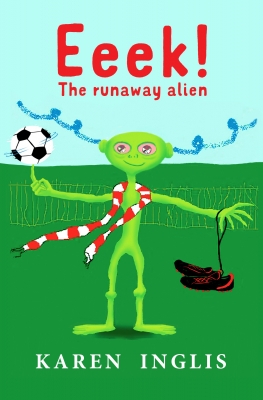 April 2012 Book of the Month   A boy, an alien and football - without any shadow of doubt it's a match made in heaven for boys in particular and if you have a reluctant reader in the house aged from 6-9 then you just might get him or her reading as a result of EEEK!  Apart from the storyline being a real page-turner it's also laugh-out-loud funny.  Just how and why a football mad alien turns up on Charlie's doorstep one day and stays with him will have you in stitches. Eeek may be fluorescent green with smoke coming out of his ears but just like ET he's a wonderfully loveable alien, but this time for the 21st century.

By Theo Barker - aged 7: I loved the football in this book and I also loved the alien because he was so funny.  The alien is just like a human boy apart from being tidy because he loves football and gets very excited when he is watching the matches.  He is very good at hiding himself so only a few people know that there is an alien. The book is very funny and mummy was even laughing when she was reading it and we were all shocked by the surprise at the end.  I will definitely tell my friends about this book - it is great.

If you've enjoyed Eeek, then check out the author's other story for 7+ year olds called The Secret Lake.

Eleven-year-old Charlie Spruit can't believe his luck when he opens his door to an alien one morning. Who is he? Why has he come? Charlie soon discovers that this alien has run away from space to Earth to be with him because he's soccer mad and the World Cup is on...! 'Eeek,' as Charlie decides to call him, takes up secret residence in Charlie's bedroom where he sleeps on the ceiling by night and pores over Charlie's football magazines and stickers by day. All is going surprisingly well until slimy sci-fi mad Sid Spiker, who lives out the back, spots Eeek through his telescope. Sid has his own plans for this alien, which bring surprises that no-one could have imagined...

Karen on her inspiration for Eeek!  I have two boys and when they were younger I was always looking for books that would encourage them to read - in particular my eldest who wasn’t interested at all.

Both boys were (and still are) mad about sport.  I had just finished my first book, The Secret Lake, and was keen to try something very different and which would particularly (but not exclusively) appeal to reluctant boy readers - or to boys who are simply too busy being boys to read. I knew that I wanted something fast-paced and funny, and with a subject matter that would appeal - and very quickly came to the conclusion that since most boys like soccer and nearly all like aliens, a story that combined the two should do the trick. ‘Running away from home’ as a theme also appealed – as did the idea of a ‘diary’ voice – to draw the reader right into Charlie’s world.  Once I started if flowed quite effortlessly – I had countless scenes of boy-dialogue to draw on, after all!

The football practice scenes were inspired by the many Sunday mornings spent down at our local football club ‘Rocks Lane’ (renamed Rockstone Lane in the story) where I (and one other mother) was joint manager of their seven-a-side team and my husband the coach!

The twist at the end of the story wasn’t planned – it just happened - and it fell into place beautifully.

The Illustrations  I knew that I needed black and white illustrations throughout – to keep busy boys hooked in - and it took a long time to find someone that I could afford and work with to make this happen.  He actually lives in Bosnia – and every picture was briefed by email with me sending him little stickman sketches of what I had in my mind’s eye.  Before doing this I laid every page of the book out onto the kitchen table to work out when I needed to break up the text with an image.  It was a lot of hard work!

The front cover is actually my own design – with a little help from Damir to add shadows, and improve the feet, hands and football boots.  I drew the alien in Microsoft Paint using my mouse and right hand (very odd as I am left-handed).  I couldn’t believe how well he came out.  I had to look on Google to work out how to draw an eye though!  The great thing about this was that my illustrator, Damir, was able to run with the design for the black and white illustrations.

'If you have boys who think reading is uncool, give them this book and prove them wrong! This book is written in a way young boys love, with football, an alien and keeping a secret from mum and dad. The book has a lovely story with plenty of funny antics that Eeek! gets up to along the way, what little boys wouldn't want to be friends with an alien who sleeps on the ceiling? A great book to encourage young boys to read and love books, I will definitely be recommending this book to my friends.'

'This is such a fun read which had me laughing out loud in places! Having previously enjoyed ‘The Secret Lake’ I was really looking forward to reading this new book by Karen Inglis, and I was not disappointed! What happens when a fluorescent green, smoke wafting, football mad alien turns up on your doorstep? Well, for the 11 year old Charlie in this story it is the beginning of an unusual friendship, involving a catalogue of amusing incidents and antics. The alien takes up residence in Charlie's bedroom, sleeping on the ceiling at night and studying football in the day time. As the adventure unfolds a sci-fi obsessed neighbour sees the alien through his telescope and ....... You'll have to read the book for yourself to find out!! I think this is a great book. With its alien and football themes I think it will capture the imagination of lots of children, and will be enjoyed by both boys and girls. I thoroughly recommend it!'

Karen Inglis lives in Barnes, southwest London. She’s been writing ever since she was little and still has a box of her daily diaries hidden in a cupboard somewhere. She also had many pen friends in far-flung places as a child. Of course that was back in the day of handwriting and posting letters – so it often took months to get a reply!

As well as writing for children Karen writes for business, but she far prefers making up stories. Her time travel adventure, The Secret Lake, sat in a box in her office for over 10 years – she’s very glad she got it out as it’s now been enjoyed by over 300,000 readers and has been translated around the world.

Karen has two grown-up boys, George and Nick, and it was reading to them that inspired her to start writing for children.

More About Karen Inglis
Add To Wishlist
Buy from our bookstore and 25% of the cover price will be given to a school of your choice to buy more books. 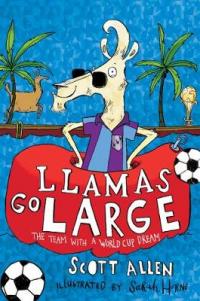