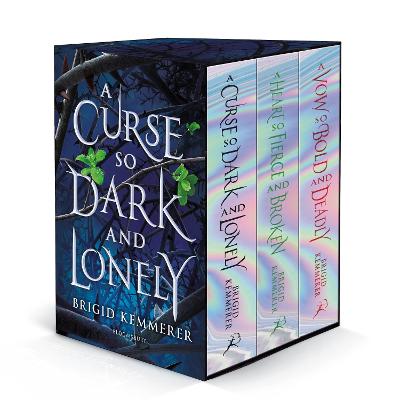 A Curse So Dark and Lonely: The Complete Cursebreaker Collection

"A rich, romantic, thrillingly full-on reimagining of Beauty and the Beast"

Masterfully melding the contemporary world with a richly evoked fantasy realm, this is a fairy tale re-telling of the finest order.

Harper has lived a tough life, what with her mom being sick and her brother forced to take on their absent father’s violent debt collection work. She has cerebral palsy but “can move quickly when I want to”. She’s a fighter too, so when she’s snatched by a stranger and deposited in Ironrose Castle, in the heart of a parallel realm called Emberfall, her captors are thrown off-guard. “Most of the girls Grey drags from her world won’t touch a blade or a bridle,” Prince Rhen observes with admiration. And Rhen has seen plenty of girls in his time. Blighted by a curse inflicted by a spurned enchantress, he’s forever fixed at the age of eighteen until someone truly falls for him. This curse has seen his kingdom all but disintegrate and many die and, if he fails with Harper, Rhen will be “condemned to spend eternity as a monster.”

With Harper adamant she’s not going to fall for him and Rhen certain the curse will never be broken, they make a pact: “I’ll help you save your country and you’ll help me get home,” Harper agrees. The road ahead is paved with pulse-quickening perils, alongside Harper’s tortuous conflict between love for her family and doing the right thing in Emberfall, not to mention her growing feelings for Rhen. There’s a tangible frisson between them, but is it love? As time ticks on and the powers of the malevolent enchantress heighten, worlds collide to take the stakes even higher.

Replete as it is with romance, relatable coming-of-age conflicts and all-out action, fans of Cassandra Clare, Marissa Meyer and Sarah J. Maas will relish this novel, the first in the Cursebreakers series, and its cliffhanger climax will leave readers aching for the sequel.

Read reviews of books 2 & 3 in the series; A Heart so Fierce and Broken and A Vow so Bold and Deadly.

A Curse So Dark and Lonely: The Complete Cursebreaker Collection Synopsis

Four royals. Two thrones. One deadly curse. In the heart of Emberfall, Prince Rhen is trapped by a curse, haunted by the beast inside, while outside his kingdom falls to ruin. Far away, in modern day Washington DC, Harper plays lookout for her brother. Despite being underestimated for her cerebral palsy, when she sees a woman in danger, she rushes to help - only to be sucked into Rhen's cursed world.

What begins as a twist on a fairy tale unfurls into an epic tale of magic, danger, love and betrayal in Brigid Kemmerer's New York Times bestselling Cursebreaker series.

This box set includes paperback editions of: A Curse So Dark and Lonely, A Heart So Fierce and Broken and A Vow So Bold and Deadly.

Brigid Kemmerer is the author of Letters to the Lost, More Than We Can Tell, and the YALSA-nominated Elementals series and the paranormal mystery, Thicker Than Water. She was born in Omaha, Nebraska, though her parents quickly moved her all over the United States, from the desert in Albuquerque, New Mexico, to the lakeside in Cleveland, Ohio, with several stops in between. Brigid is now settled near Annapolis, Maryland, with her husband and children.

More About Brigid Kemmerer
Add To Wishlist
Buy from our bookstore and 25% of the cover price will be given to a school of your choice to buy more books.

When The World Was Ours